Disruptions occur with varying degrees of impact, demanding an adjustable timetable. This is real-time traffic management. The main goal of real-time traffic management is to always have an executable and safe plan and to have an operational perspective for the traveler. In the next section, we will have a look how to take care of these situations using the bathtub model and predefined solutions.

Who are actively involved when handling a disruption, depends on the type of the situation. The classification of these situations is based on the scale of the impact and how much the alternative plan will deviate from the published plan. There are minor, moderate, severe and catastrophic situations. The following video will give an idea of what these types of disruptions mean and who are involved when they occur.

On the previous page, we explained which type of disruptions there are and who are involved (we will discuss disruptions in greater detail next week though). The video showed who is responsible for making an alternative plan depending on the type of disruption. As explained, the main goal of real time traffic management is to always have an executable and safe plan, and to have operational perspective for travelers. In this section, you will learn how the alternative plan is determined.

These steps can be visualized in an adjustment model, as given in the figure below.

The green line illustrates the execution. When a disruption occurs, emergency measures are taken to keep the execution safe. Once the alternative plan is created, the execution is performed according to this plan. After the disruption changes in execution are made to fit to the new plan. 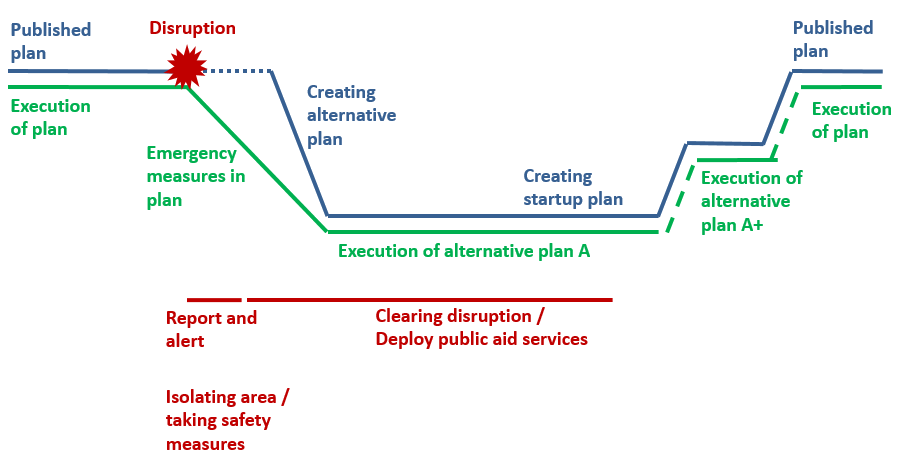 Disruptions are taken care of by changing the published plan to an alternative plan, which performs at a lower level but is still executable and safe. In order to respond in real time, the alternative plan needs to be drafted quickly. This is done by using pre-defined solutions.

Pre-defined solutions are fully worked-out timetables that can replace part of a published plan. They are time- and place-specific and the preferences of the train operating company are taken into account in these solutions.

Pre-defined solutions are made for disruptions between two buffers.

Buffers are locations along the track where sufficient logistical possibilities are offered, these are often stations. The track between the two buffers can be completely blocked or only partially.

The figure above shows the Dutch network around Schiphol. If something occurs, where no trains can run between Schiphol and Hoofddorp (second figure), it has an effect on many other stations. Stations connecting main lines will become buffer zones for trains that cannot continue. In the third figure, you can see how trains have to be redirected (simplified), showing the impact is rather large, since Schiphol is an important station with many direct connections across the country. This is done by following the scenario of a specific pre-defined solution (in this case to account for no trains between Schiphol and Hoofddorp).

Large deviations are required and many trains are forced to turn around. This scenario impacts a large region and by having pre-defined solutions an alternative plan is made quickly even for this kind of complex scenario.

Schiphol is a vital station within the Dutch railway network. If a problem occurs it can have effects all through the country. Later this week, we will introduce the Schiphol case in which you will become familiar with the many trains stopping at the six available platforms (up to 50 trains per hour during the day). Since the station is located underground and has a limit of four tracks ‘sticking out’ on both sides, it often is referred to as a shuffleboard.

This means that small things (like a broken signal, copper theft, weather condition or a fire alarm) can cause major disruptions. Different causes of delay will be further discussed in week 4, but in the assignment case this week, we will focus on the specific situation of Schiphol.

Below an overview of all the different trains coming into the station at a Wednesday morning between 9:30 and 10:00 AM and some news articles related to delay at Schiphol.