Sorry, there don't seem to be any downloads..

In an autonomous differential equation, none of the terms depend explicitly on the independent variable.

In our differential equation,

the independent variable t does not occur explicitly: although P and dP/dt are functions of t, the time is not mentioned in the differential equation by itself. Our equation is autonomous.

A differential equation that is not autonomous is for example  dy/dt=5y(t)+sin⁡(t). For this equation you cannot draw a phase line.

Because our differential equation is autonomous, you can make a graph of dP/dt versus P(t): 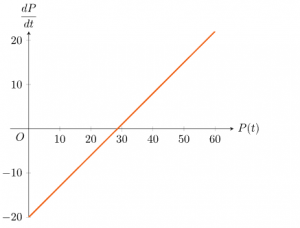 In this graph you can see that if P(t) is smaller than the equilibrium value 200.7, the rate change, dPdt is negative, so the value of P(t) will decrease. This means that in the phase line you should draw an arrow pointing in the decreasing direction for values below the equilibrium. This is the same as you have seen in the video. For values of P(t) larger than the equilibrium, the value of dPdt is positive, so the arrow in this case must be pointing in the increasing direction.

In the next exercises we will consider a “slightly” different differential equation: 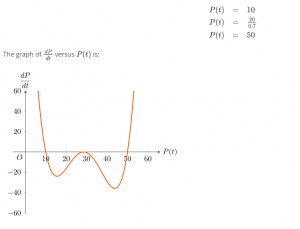 Mathematical Modeling Basics by TU Delft OpenCourseWare is licensed under a Creative Commons Attribution-NonCommercial-ShareAlike 4.0 International License.
Based on a work at https://online-learning.tudelft.nl/courses/mathematical-modeling-basics/.