This chapter will give your more information about the different aspects of a train station. Not only is a station a junction in a train-track network, it has an influence on the city and urban structure as well. Besides that, it will have an impact on the traveler’s experience.

Arriving passengers get their first impression of a city from its station. Municipalities do realise this and are investing a lot in the city’s train station. They hire famous architects to design the train station and try to make it more than just a place to depart or transfer. It also becomes a place to connect people and urban areas, through the way the station building is structured.

Finding a balance between being a mobility junction (not only for trains), having an attractive surrounding and having development opportunities around it, will make it a wanted place for investors. Especially considering how many cities grow toward their stations.

A good, functioning station is essential for the social, economical, political and urban development of a city. That is why this chapter starts with a few examples of interesting train stations. This will mainly focus on the way they are architecturally designed and what influence this has on the urban area around it. After that, we will elaborate on different aspects inside the station that influence the passenger’s experience. 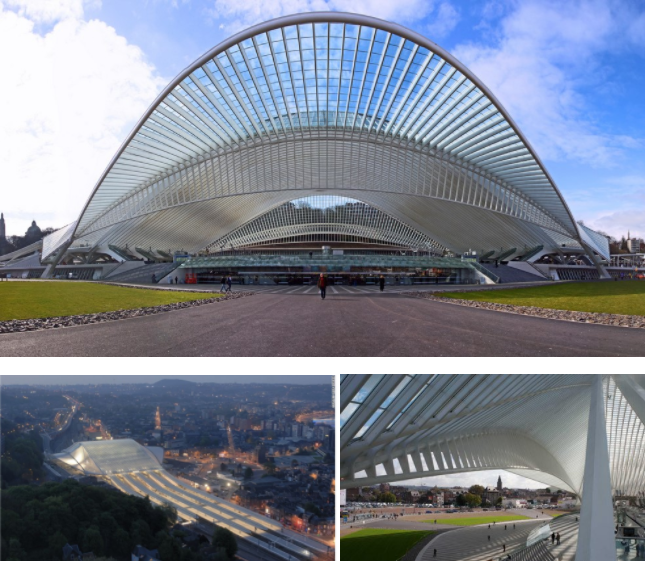 Development: The original train station of Liège was opened in 1842. However, this station didn’t meet the needs of 21th century travel, so a new station was planned. Calatrava was the architect assigned to design this new station. On September 18th 2009, the station was opened.

Architecture: The station is built with steel, glass and white concrete, fitting Calatrava’s signature style. Special about this station is its facade. Calatrava told the Belgian railway staff the following about it: “We completely reinvented the facade. Or, better, we said, ‘There is no longer a facade.'” (source: The Guardian) There is no main facade on one side, but instead the building is opened in every direction.

Network and scales: One of the reasons for Liège to built a new train station was the coming of the high speed train to the city. So next to local trains entering the station, it is also connected with the international network. 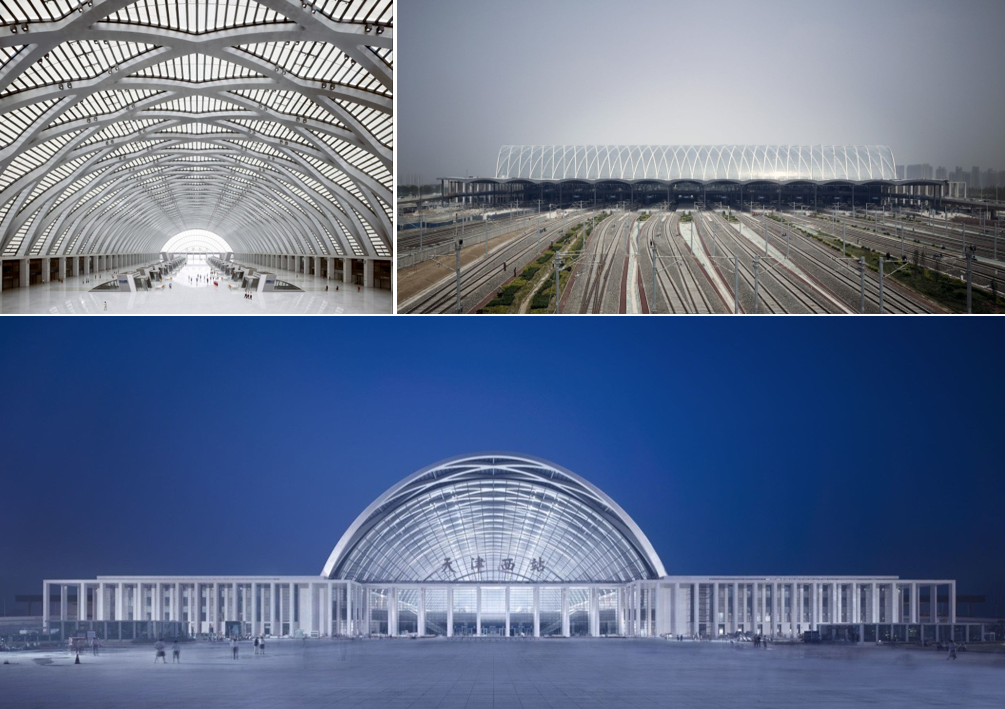 Image: the train station of the city of Tianjin, China (source: ArchDaily)

Development: In 2008, renovation work on the station of Tianjin started. At the same time, China worked on a high speed train track between Beijing and Shanghai. For this, they increased the number of platforms in Tianjin. However, a renovated station wasn’t enough, so they also planned a new station. This new station is opened in the summer of 2011.

Architecture: The station is designed by the firm Gerkan, Marg and partners and has a big impact on the city of Tianjin. It is part of a big urban restructuring project and the station connects the commercial north with the old centre of the city in the south. The architects symbolised this connecting character in the roof construction.

Network and scales: As said, the station also houses the high speed train. This is served by Jinghu High-Speed Railway. The station is also served by Jinghu Railway and Jinbao Railway, and is in that way part of the regional network.
You can reach the station by foot, taxi, bus and metro. 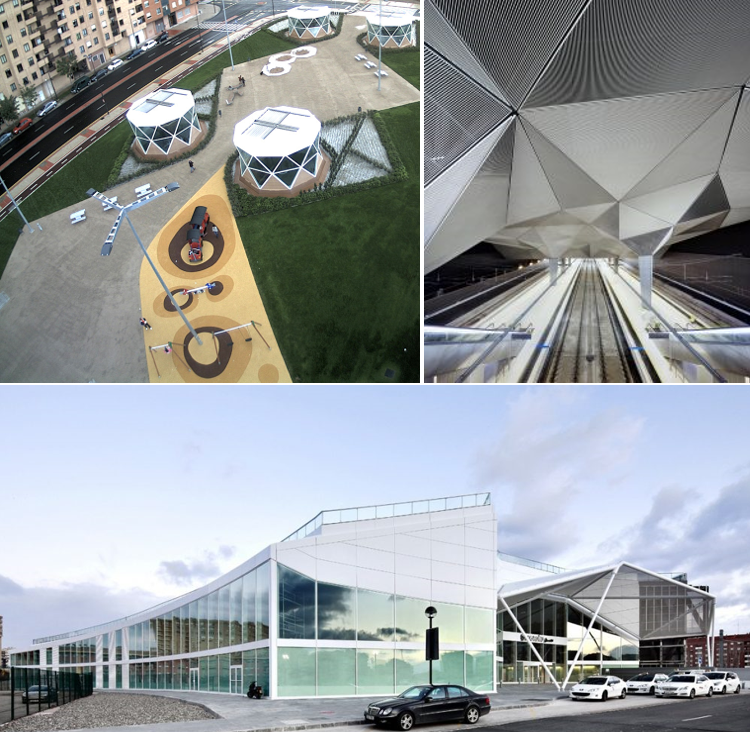 Image: the roof of the train station in Logroño, Spain (source: ArchDaily)

Development: Logroño already had a station, but it needed to be updated to accommodate the coming of the high speed train. Abalos + Sentkiewicz Architects won the competition and were assigned to design the station. The new station is part of a bigger urban planning and landscape development project.

Architecture: With this station they wanted to connect the north and south of the city of Logroño. The architects tried to do this by creating a public park on the roof of this transportation hub which stimulated urban and social integration. It gives pedestrians and cyclist an opportunity for easier mobility.

Network and scales: The high speed network is operated by Renfe, the Spanish national railway company, and connects Logroño with Madrid, Barcelona en Bilbao. The station is next to the national network, and also connects with the regional one. 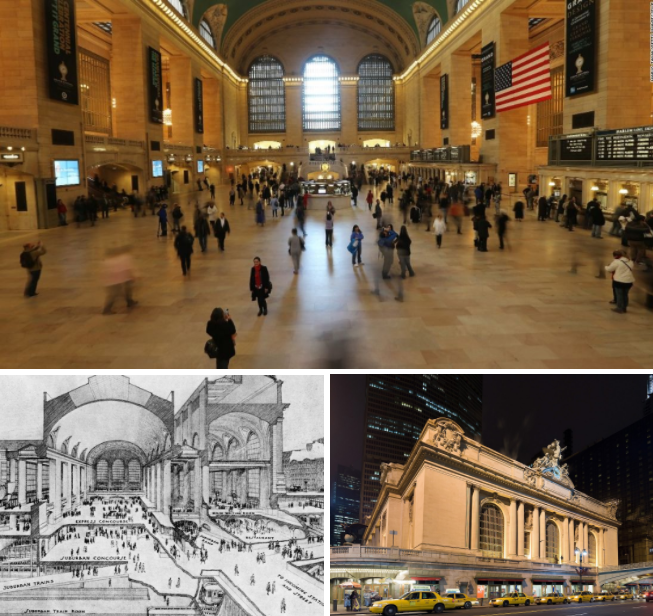 Development: Between 1899 and 1900, a lot of renovation work was performed on Grand Central Station in New York. But because of a crash in the Park Avenue Tunnel on the north side of the station, a decision to build a new Grand Central Station was taken. This station had to, unlike the old one, fit the growing metropolis. After a competition, two architectural firms won and were chosen to make the new design. Those firms were Reed & Stem and Warren & Wetmore.

Architecture: Reed & Stem and Warren & Wetmore agreed to work together under the name of Associated Architects of Grand Central Terminal. The overall design was the responsibility of Reed & Stem, Warren & Wetmore made sure architectural details were included in the design.

Under the ground, there are two levels of train tracks and platforms. On the higher level, the main trains arrive, and at the lower level, the suburban trains stop. Because all the train tracks are underground, there is space to develop real estate above. The construction of the building is strong enough to carry a tower that still can be built.

There are many different kinds of stations, but what they all have in common is that they are a place of coming and going – a link between the train ride and the environment. This chapter shows that the station is more than a technical and functional building. It is a public space where the traveller’s experience is a focus point.

We can divide the station into different domains, which each have a separate but interconnected purpose, and signs that create clarity for the travellers and give them the information, orientation and facilities needed. 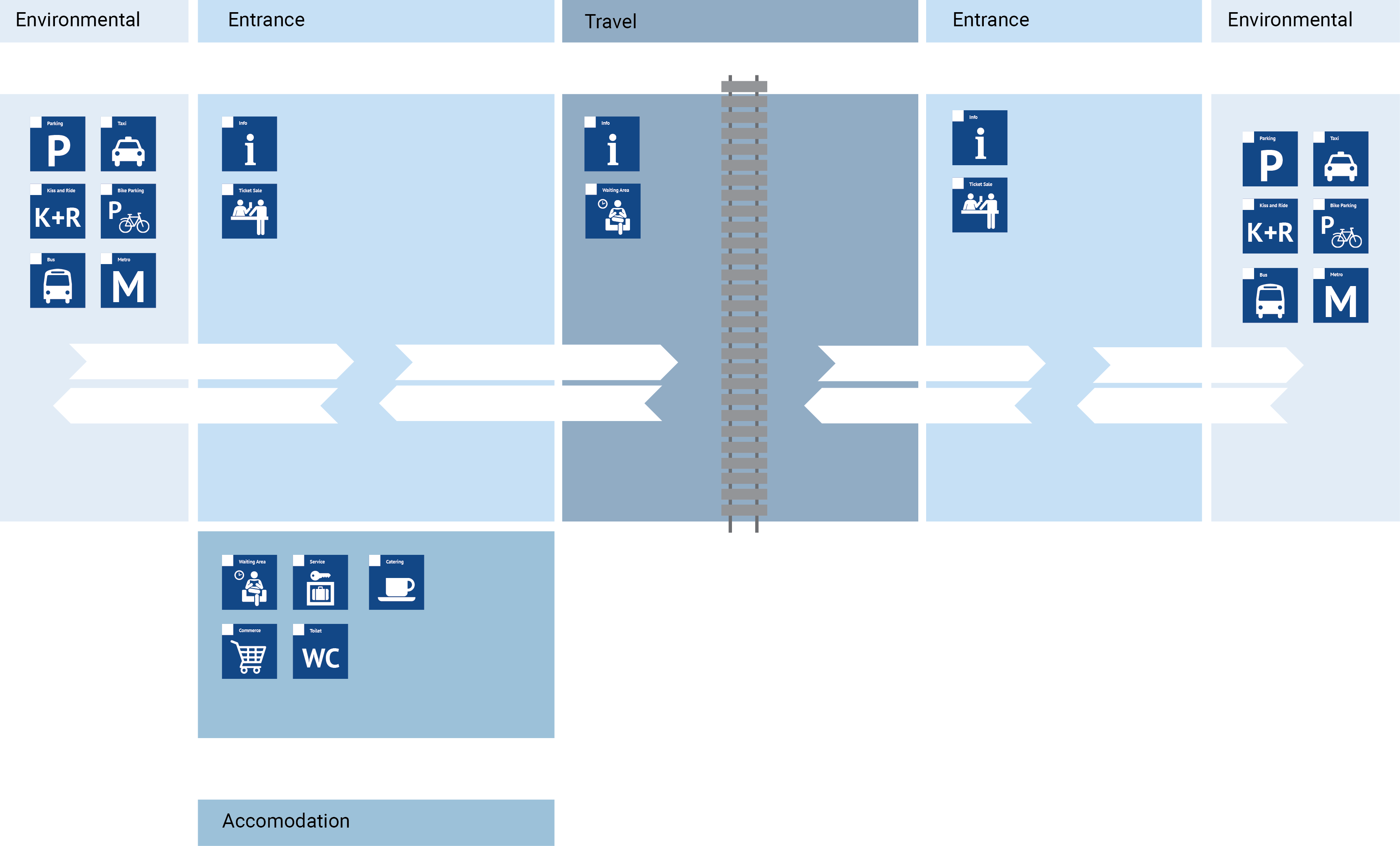 A library on the station of Haarlem (image by de Reisbibliotheek)

Getting lost in an unknown environment can be a stressful experience. Organisations must facilitate wayfinding for their customers in order to prevent them for having negative feelings. If they get lost in a station, the “must” traveller might be late for her appointment, while the “lust” traveller might spend too much time searching for the right way, instead of relaxing.

There are multiple ways to help travellers navigate through a station:

1. Signage: You can use clarifying signs, which show the different facilities and directions. These signs need to be understandable for all types of travellers, native, foreign and differently-abled.

2. Station Lay-out: The station lay-out has a huge influence on the wayfinding, even though it is less obvious. The complexity of a building needs to be low enough, so the travellers can absorb all the information around them, and give them a clear overview of the environment. Main paths (often delineated through floor colouring or lighting) and the visibility of orientation spots (for example the entrance, escalators) within the station can help the traveller navigate the overview (Werner & Long, 2003). Aside from this, differentiation is important, to distinguish the spaces from each other. By working with the four different domains, it will be easier for the traveller to figure out where he/she is.

The following example shows The Hague Central Station and its different station domains including corresponding signs. The station has four floors, but this example will only show two of them.

The Hague Central station is an easy-to-read building, where multiple public transportation networks converge. The station building includes all modes of transportation: train, tram and bus. Inside, the trams ride along an elevated track above the train tracks. Retail and hospitality areas can be taken in at a glance. Nowadays, about 190 000 travellers and passers-by make use of The Hague Central Station, but this renovated building was built to host double this amount, in order to fulfil the needs for the coming decade. To facilitate this huge number of travellers, they designed a natural and flexible organisation of traffic flows. Multiple routes are possible, in order to let the traveller create their own route in an easy and clear way. 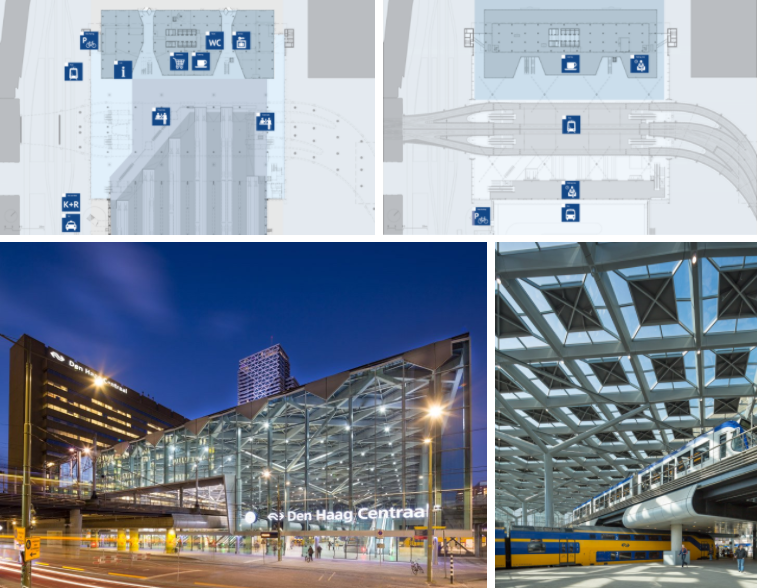 After developing a good wayfinding system in a train station, it is necessary to track and predict the pedestrian flow. When you have the right data and findings, you can improve the ease and speed of walking through the station. This will directly increase the customer satisfaction, but maybe, more importantly, will increase the safety in the station as well.

First the pedestrian flow needs to be monitored in order to get a good overview of what is happening. This can be done by different kind of sensors/tools, such as cameras, wifi-spots, bluetooth or location trackers. This data collection will include the number of visitors, densities and walking speed. When there is a big event going on and they expect a big crowd, they even check social media sources to know who the visitors are and what they are talking about (see the flowchart below). With this information they can determine the level of service they want to provide to the travellers, and the potentially dangerous situations that might occur. 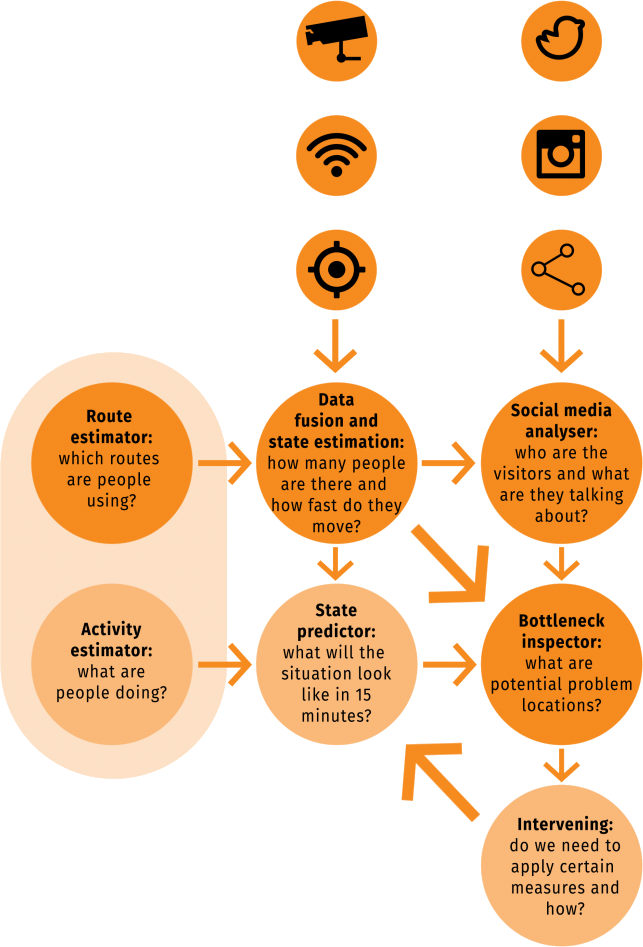 When the right data is gathered about the pedestrian flow, predictions and decisions can be made to develop the train station. The following golden rules provide solutions of where to act and when, improving the crowd management with the data.

The videos (below) shows how to solve major crowd management problems. One is a train station in Santiago, where the daily pedestrian flow caused difficulties when moving out of the station. This was solved by separating the flows in different directions (direction 2). The other video shows the improvements of information provision during emergencies in a train station in Barcelona (direction 3).

(Both videos were sourced from YouTube, and are complementary material to illustrate the points made above).