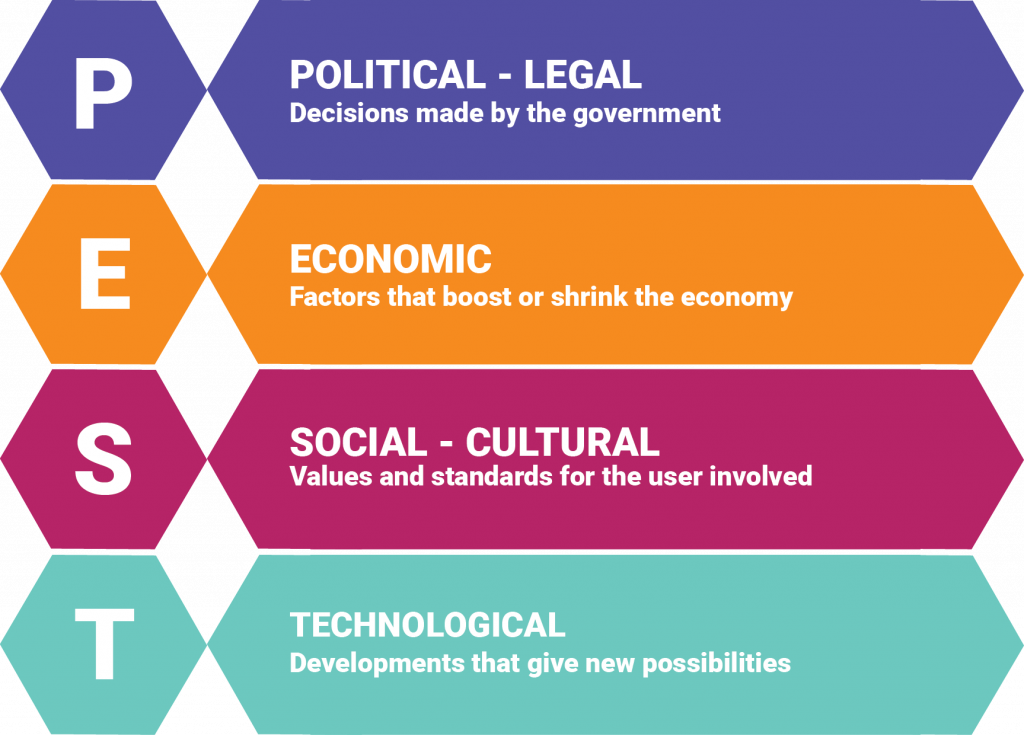 This part of chapter 2 will give an insight in the train station of Lille. Different aspects of this station make it an interesting case to look at. A few of these factors can be explained by the so-called ‘PEST-model’: a tool to do an external analysis or research to discover potential directions for operations. The explanation for the model is shown in the following image:

Keep these aspects in mind while reading the case study.

Lille is a city in the northern France. It’s founded on an island in the Duêle River, which explains the name of the city. It comes from the Latin word l’île (the island).

The city was built with walls around it. This caused trouble in beginning of the 19th century. Lille needed a train station but there was disagreement on the location of the station, inside or outside the city walls. The solution was found in a compromise. A terminal for passengers would be built inside the city walls, one for the goods outside. Later when the city evolved most of the city walls disappeared.

Geographical development of the city Lille and its stations: 1. city centre of Lille with city walls, station consists of two parts; 2. city walls disappeared; 3. Lille needs another station, two stations close to each other (source: TUDelft)

Lille flourished during the industrial revolution thanks to coal, mining and the textile industry. In the end of the 20th century, the city endured a setback caused by the declined production and demand for those products. Lille decided to focus on the tertiary sector, the service industry.

Image: development of the city of Lille (source: TUDelft)

A major impulse was giving to the city due to a few political decisions. The agreement for a tunnel between the United Kingdom and France was signed in 1982. Lille was selected to house the station for the TGV instead of Amiens and that train station would be built in the city centre.

This is due to the location of Lille, which is centrally between Paris, Brussels and London, and the coming of the TGV train made those three places are relatively fast to reach. Specifically: 1 hour to Paris, 38 minutes to Brussels and less than 2 hours to London. The combination of the centrality and proximity of Lille makes it a favourable business environment. 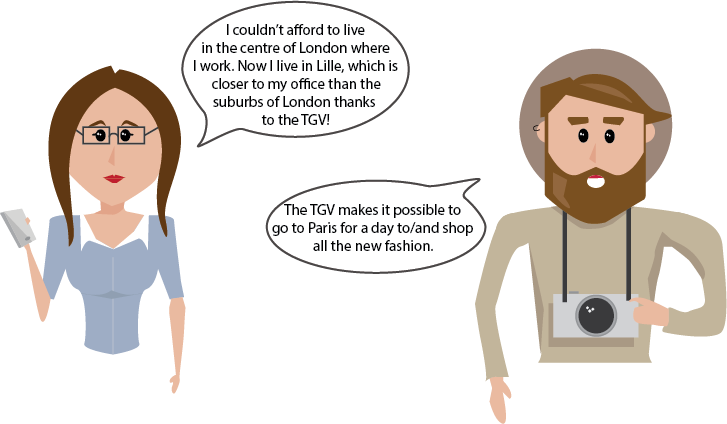 A new station was needed with the coming of a TGV train stop in Lille instead of Amiens. To design this station and the area around the station, OMA (Office for Metropolitan Architecture) was selected in 1989. OMA is a Dutch architectural firm based in Rotterdam.

However, there wasn’t a competition to select an architect for this project. Instead, eight architects were interviewed for a day. Rem Koolhaas, founding partner of OMA, was selected to design Euralille.

Euralille is the name they gave to the development of the station and real estate around it. The project covers a large area and has a big impact on the city. OMA was responsible for the urban planning of Euralille. Different architects designed the buildings in the plan.

The only reason the architects of OMA were not completely paralyzed is because they didn’t believe this project would succeed. This caused them to design in a bold way and to their surprise their ideas were approved. *

The TGV was planned to go underground in a tunnel. The first thing OMA suggested was to put the highway in a tunnel parallel to the TGV tunnel. Between these two tunnels a parking garage was planned. The following image shows the current situation. 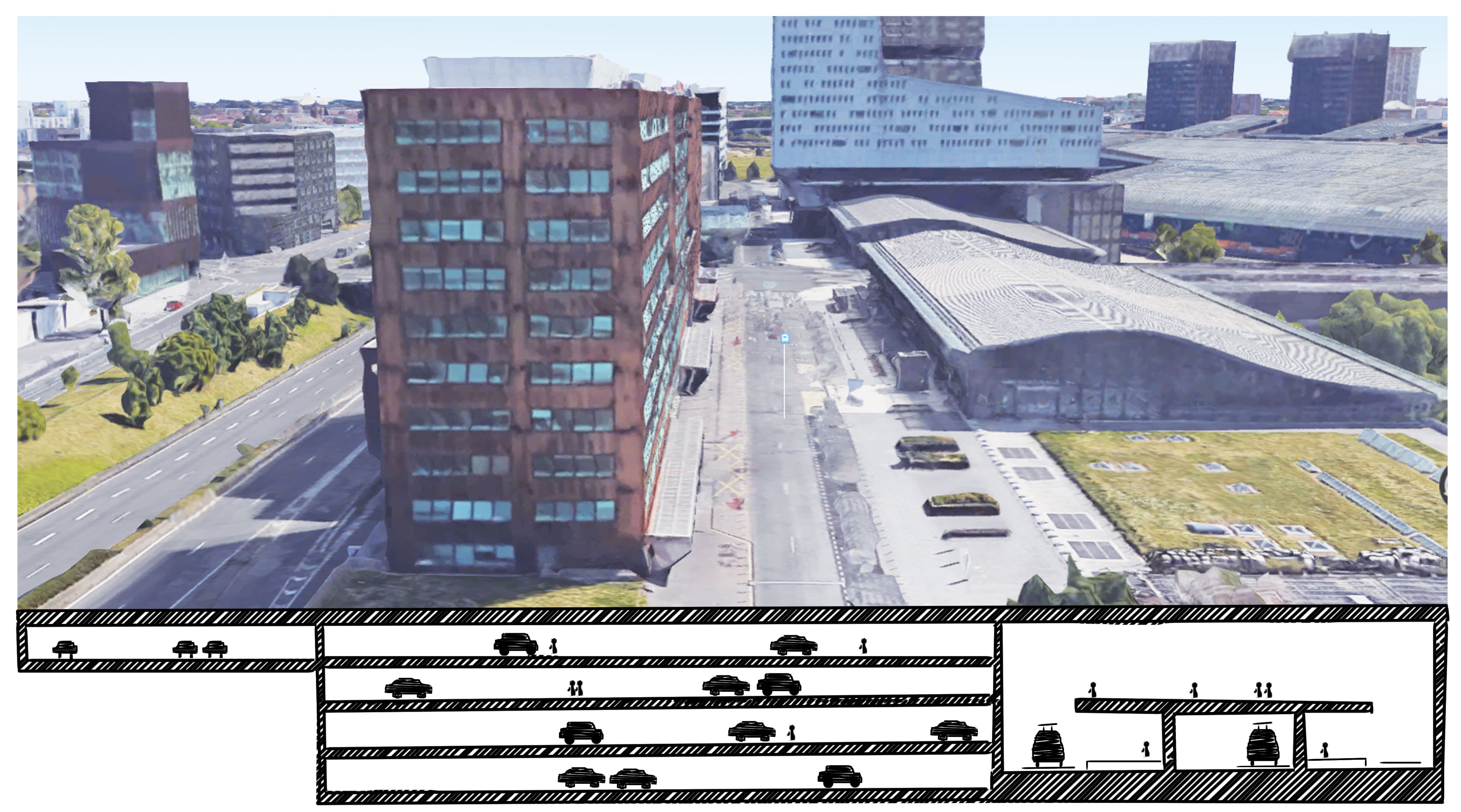 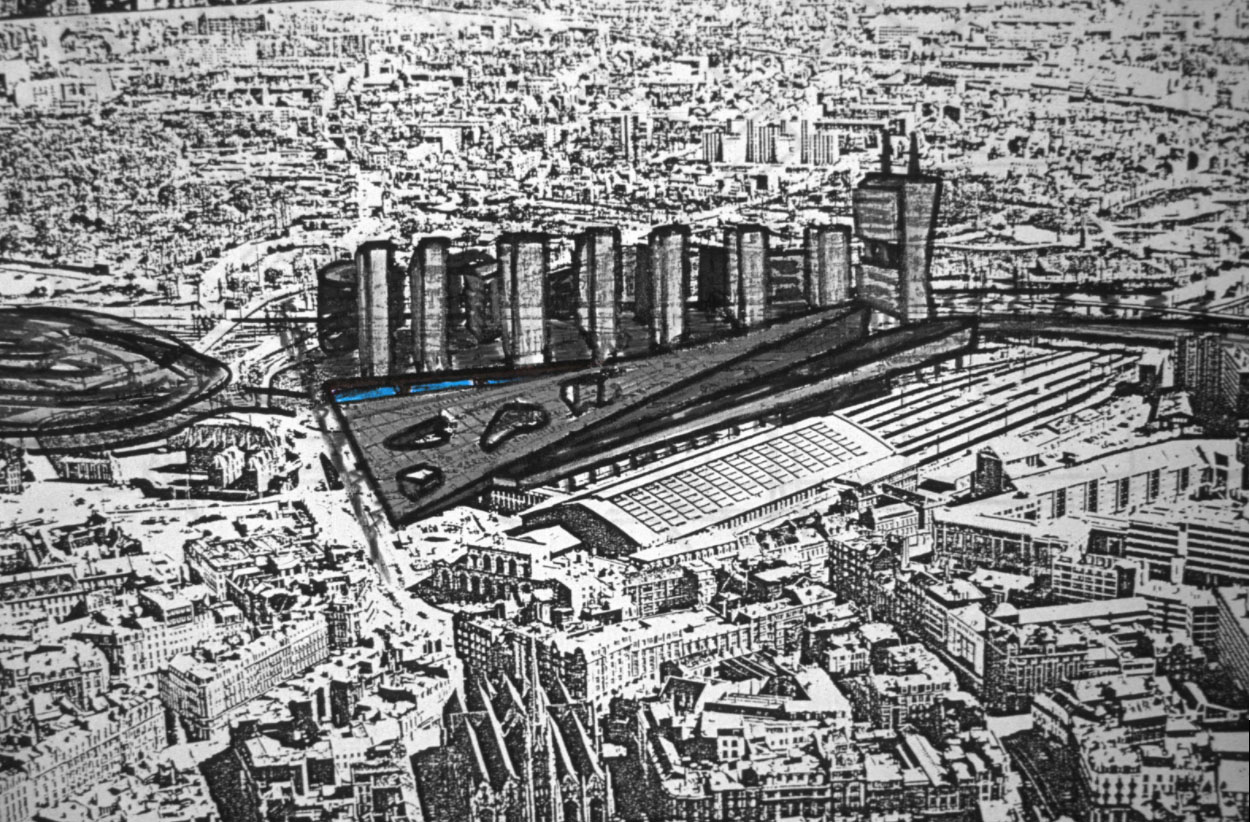 The new TGV station was build in an angle compared with the original station, Lille-Flandres. Because of this a triangle shape arise between the two train stations. OMA decided to place a public building in this triangle, Triangle des Gares. The building houses a big shopping mall and other facilities (which will be explained later) and was designed by Jean Nouvel.

Triangle des Gares’ roof is tilted, one part is designed in such a way that the TGV tunnel is exposed. This makes it possible for visitors to see the TGV trains. Because of this, the connection between the city and the new high speed train, who has a big impact on the development of the city, is made.

Image: a concept sketch for Euralille showing the tilted roof, in blue a window through which the TGV train is exposed (source: OMA)

Above the TGV tunnel, a few high buildings were planned by OMA. These buildings would symbolize the influence of the coming of the TGV in Lille, developing it as a business centre. Two of the planned buildings have been completed already.

A little bit farther away from the stations, OMA built its own building. It is oval-shaped and 300 meters long. In it are three different components: Zenith, a 5000-seat concert hall; a congress centre with three auditoriums; and an exposition space of 20.000 m2. The three different parts are connected and can be used together. 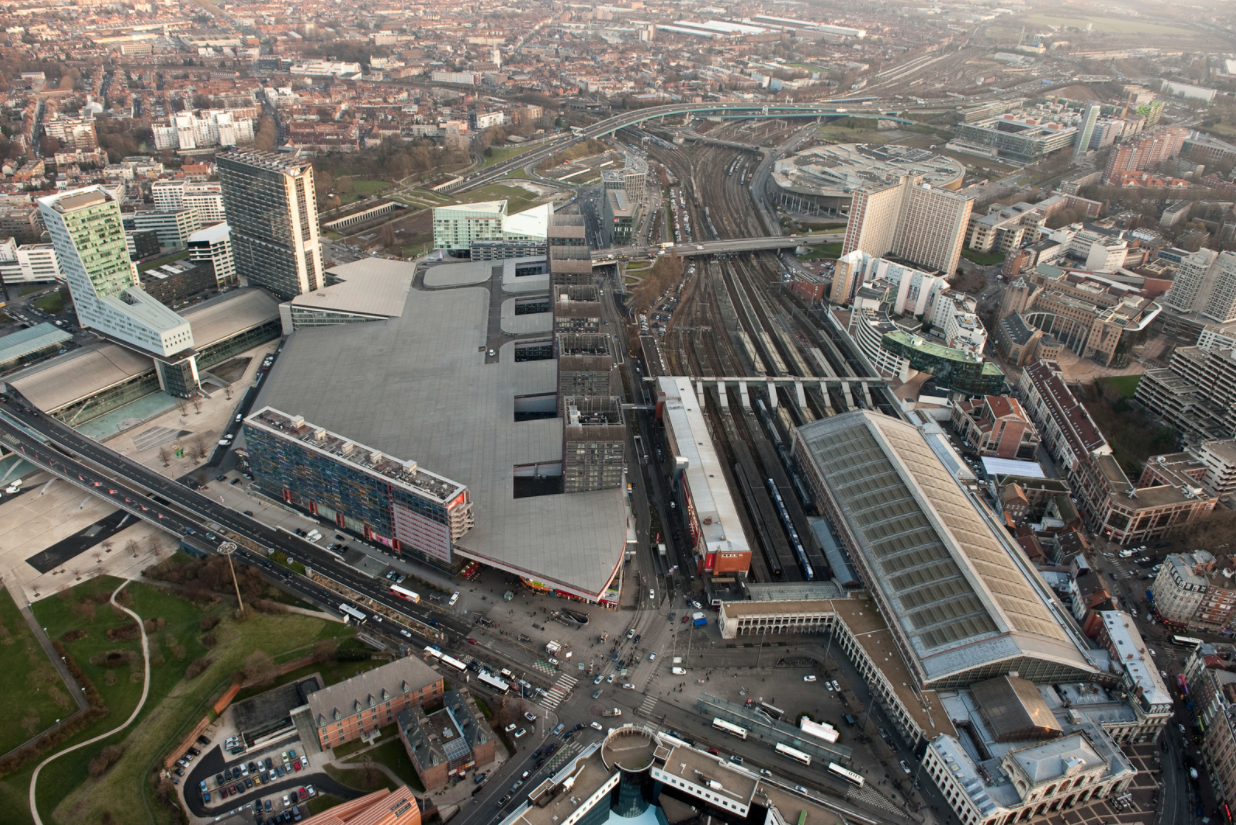 Image: a complete overview of the Euralille project (source: OMA)

As described before, different domains can be distinguished in a train station. The environmental, entrance, travel and accommodation domain. Different facilities occur in these domains. In these images, you see the various aspects in the station of Lille. 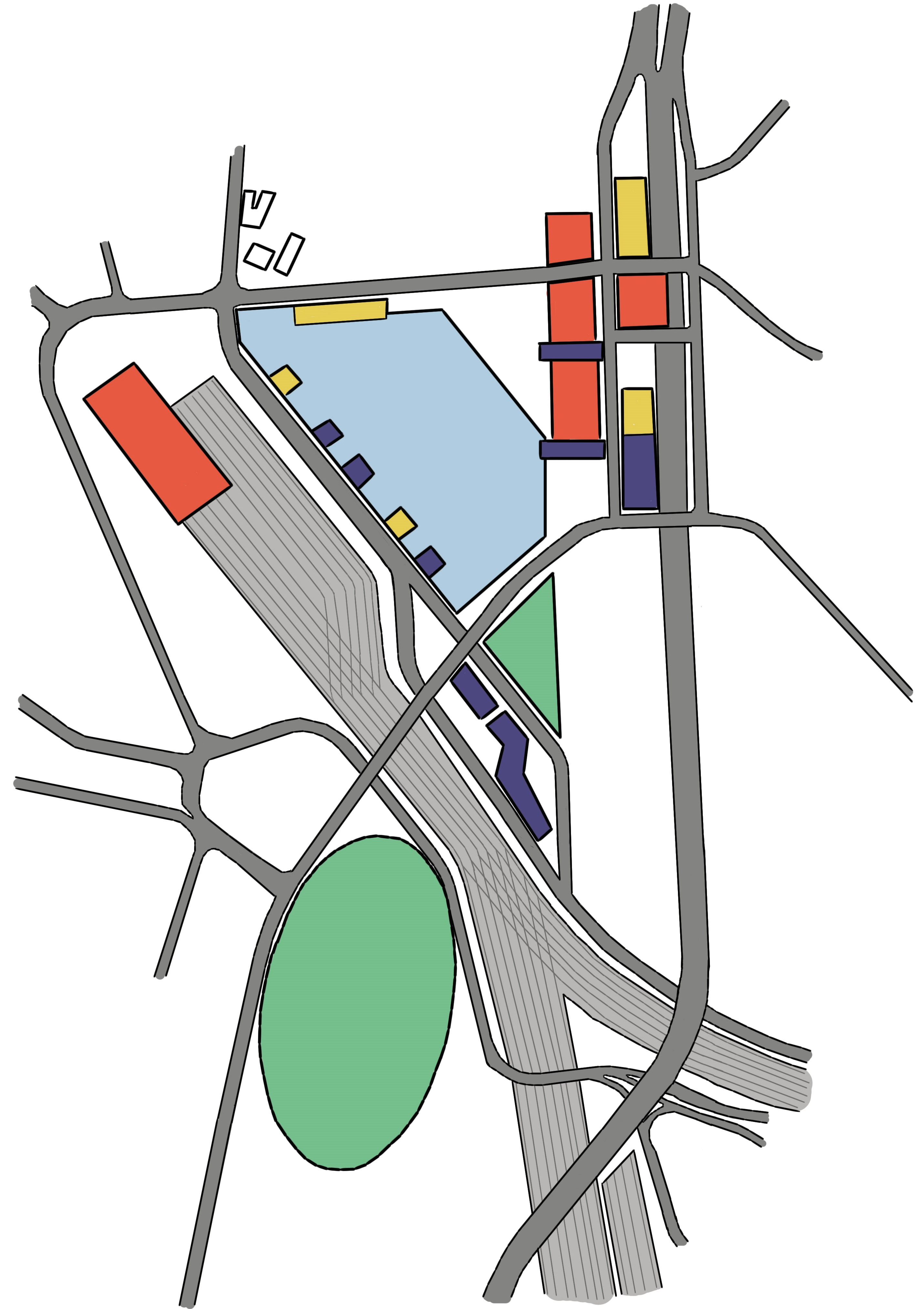 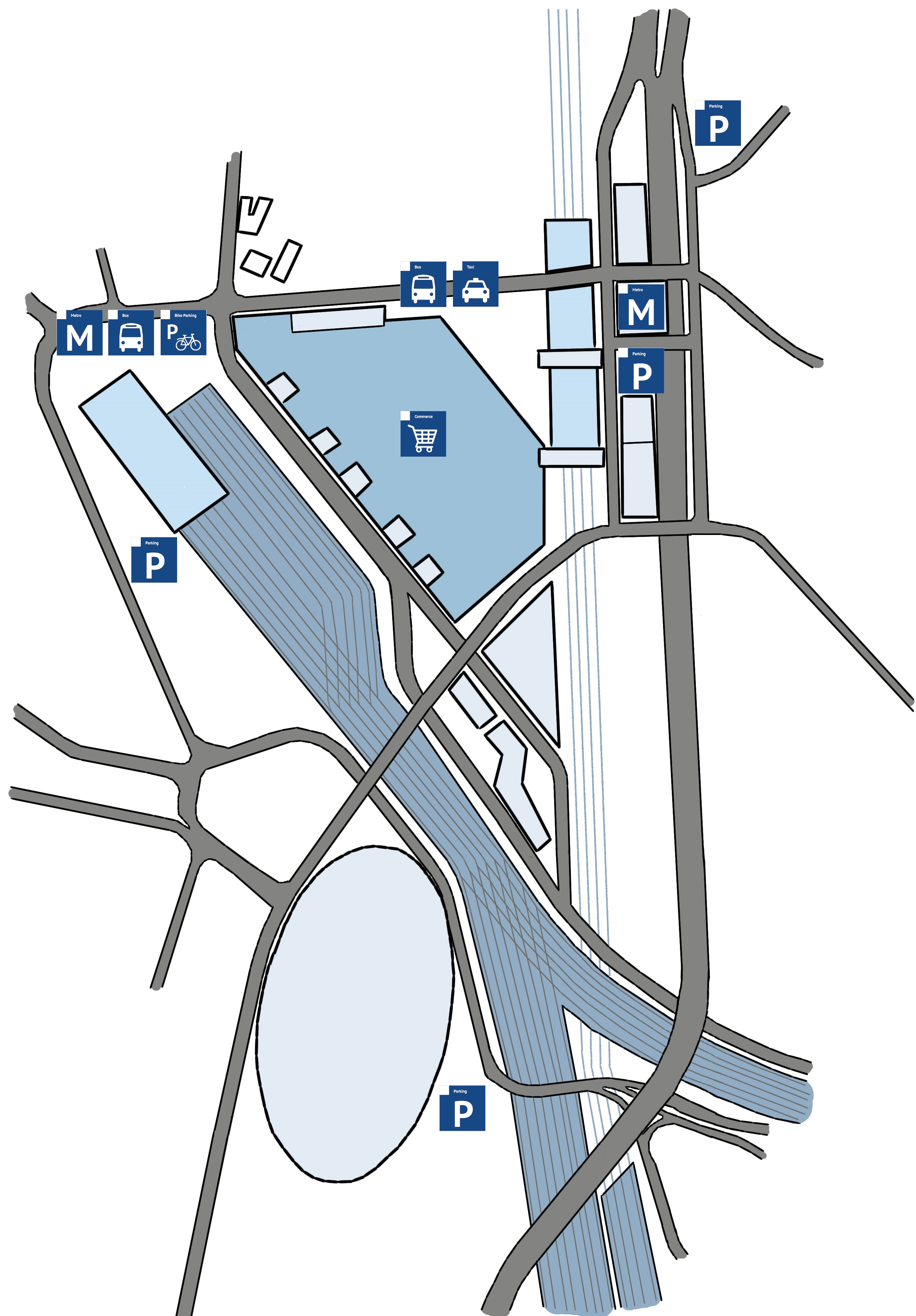 On the picture above, the facilities in Euralille: in red the two train stations and a metro station, in (light) blue a shopping mall, in purple/blue offices, in yellow hotels and in green entertainment; a casino and the Zenith, congress centre and exposition space (source: TUDelft)

On the picture below, the different domains of Euralille. From the most dark blue to the most light: travel domain, accommodation domain, entrance domain and environmental domain (source: TUDelft) 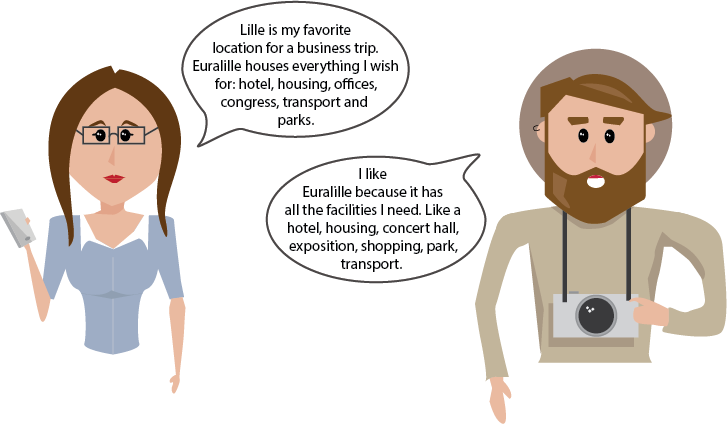 If you look at the train network in Lille, the city operates on different scales. The national and the regional trains mostly depart from the original train station of Lille (Lille-Flanders). The new station, Lille Europe, is built for the TGV, which is an international train. 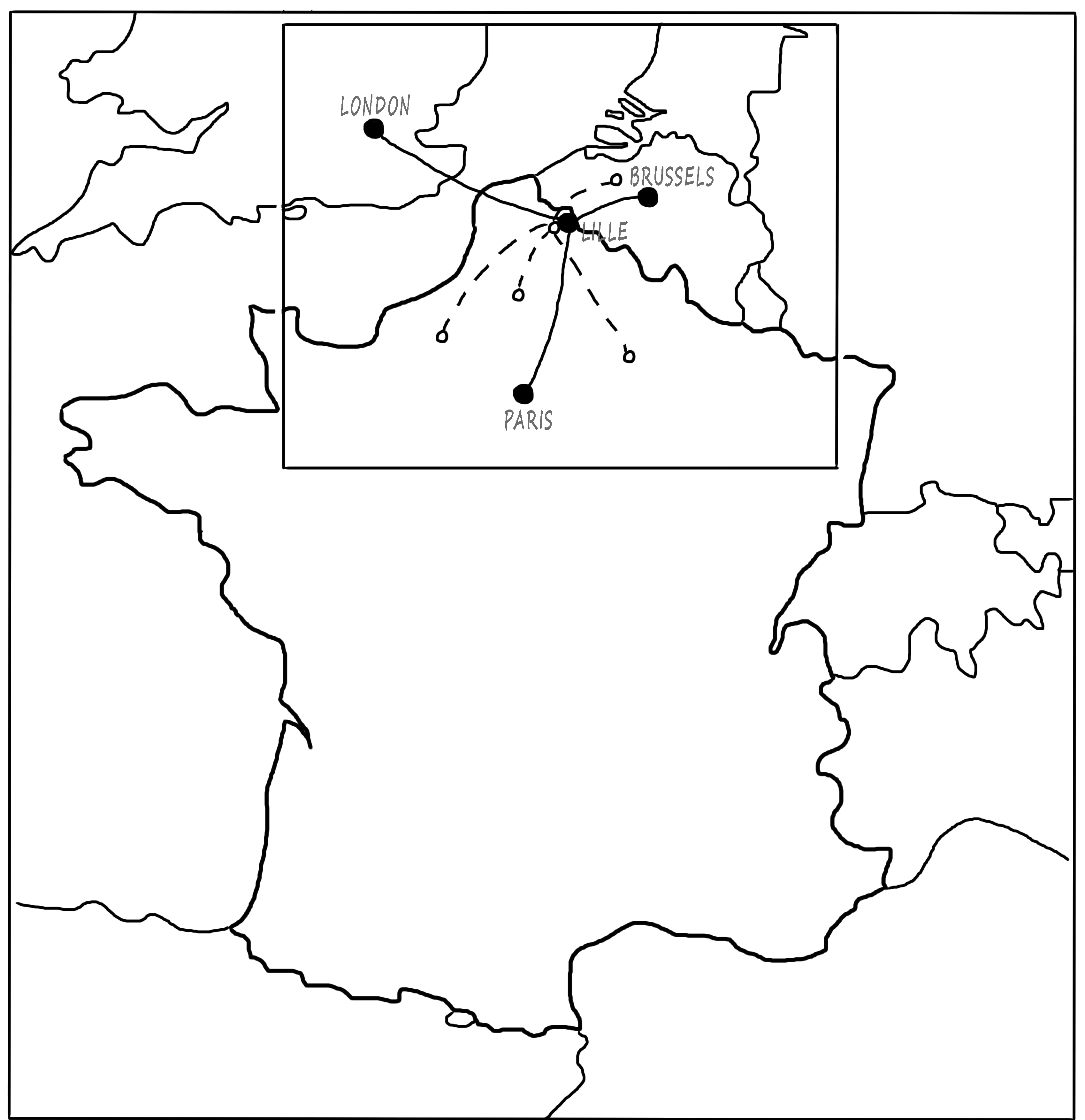