If your train was the only one, life would be so much simpler. It could leave at the desired time and take you directly to your preferred destination. There would only have to be one track, one platform, no switches and (most likely) no delay. But, when millions start using the railway network, it becomes rather complex. Passengers expect to be able to travel at any time to any place, and unfortunately, both trains and the infrastructure have limited capacity.

We have local trains, intercity trains, high speed trains and freight trains, whose networks are all connected. Strategic and robust timetabling is essential to ensure comfort, reliability and safety. But that is only one piece of the operations-puzzle: if something unforeseen happens, people have to be able to adjust in the moment, in order to keep the inconvenience to a minimum. The challenge is not to make the perfect timetable on paper, but the one that is adaptable to the unexpected challenges that can happen at any moment: real time traffic control.

While our focus during this MOOC is primarily on passenger transportation, we will sometimes look at freight transport, since it often uses the same infrastructure and is an important part of the railway network. Of particular importance, when comparing both, is the finances behind both systems. Where passenger transport is largely self-sufficient in dense area’s (paying users), it has a wider range and also stops at remote places, which is often based on regulations from the government. This makes passenger transport supply-orientated.

For passenger transport, concessions are issued by governments and are based on regions. These concessions ensure a frequent supply of trains, even if there are no passengers. This makes the transport system user-friendly. For freight, this is not the case. If there is no demand, then there are no trains. This is a fundamental difference. Each train, track usage or container, costs money and someone has to pay for this.

While for passenger transport, railways are used for many different distances; for freight it usually is operating at semi-long distance. The graphic below shows how money is the main factor in choosing a transport type, which is used for commercial purposes when transporting goods. Tx is not zero for the different modes, since it represents the terminal costs for loading and unloading. D1 is the break-even point of road and rail. Up until this point, transport by road is most cost efficient. D2 is the break-even point of rail and inland shipping. Beyond this point, shipping becomes cheapest. Between D1 and D2 is where rail transport gives the lowest transport costs per unit. The graph shows that for smaller distances, road transport remains the preferred mode of transport.

An exception is the new freight route from China to Europe, which has been briefly mentioned in the previous week. This new connection makes long rail transport possible. Where it might cost more than shipping, each transport as additional advantages. Where costs often is leading, time, reliability and safety are also taken into account as well as environment. Railways are doing very well on these factors.

Freight transport is an international operation. A free market requires a suitable railway network to be able to efficiently transport products. Rail infrastructure is generally developed separately in each country. Therefore, every country has its own kind of infrastructure facilities and materials. In Europe, to facilitate the free market, rail corridors are developed. These corridors are lines through multiple countries that use uniform structures and stock. This leads to a more suitable railway network for freight transport. The figure below shows these rail freight corridors. 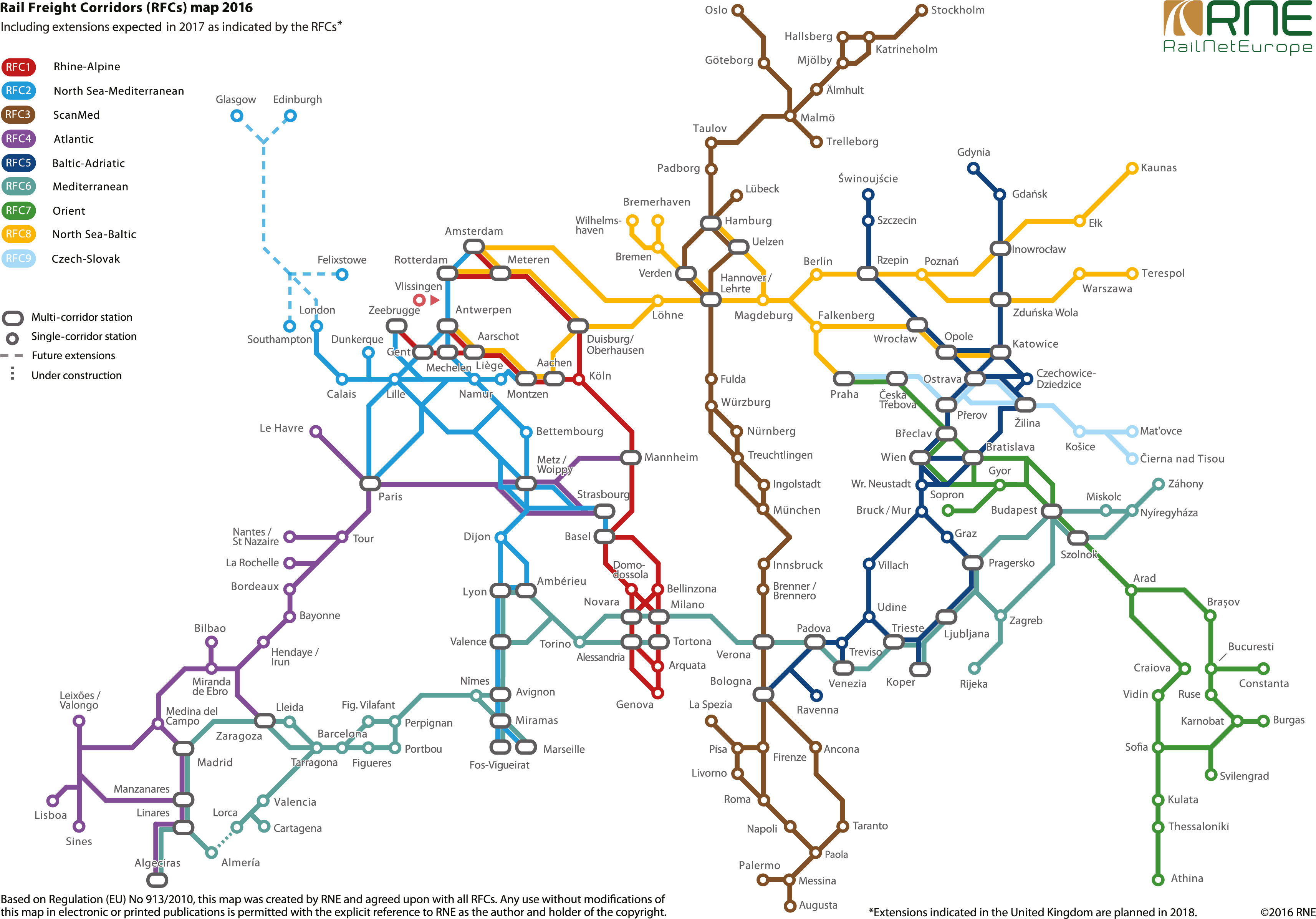 The corridors can be strengthened in several ways. First of all, the structures and stock can be made uniform along the entire corridor. Another way is to improve the track to facilitate larger and heavier trains. This improves the capacity. The final way to strengthen the corridor is by removing bottlenecks. Bottlenecks are locations along the track, which largely limit the capacity. An example is the strengthening of the Rhine-Alpine corridor. This is done by removing the bottleneck in Switzerland: i.e. improving the Gotthard-Basis and Lötschberg tunnels. The figure below shows the pre and post situation for the Gotthard-Basis tunnel in blue and red respectively. The flat route in the new situation can accommodate longer and heavier freight trains.

Effect of corridors on infrastructure in a country

The introduction of the European rail freight corridors changed the focus of the rail network in countries from national to international. In the Netherlands, 85% of all freight transport is now international. Only 10% is national and 5 % transit. There are 3 European corridors that go to/from the Netherlands. The figure below indicates the distribution of this rail freight transport. You can see that most of transport goes to/from the Rhine. Around 60% of the transport travels further than 300 km. 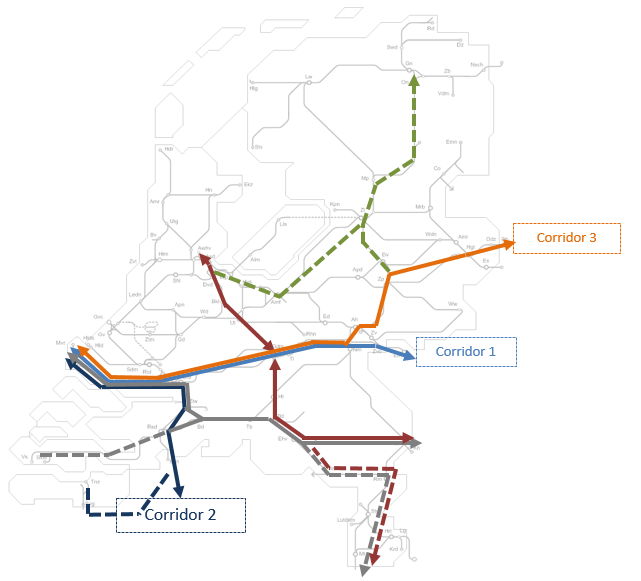 Are you interested in more on freight or are you an expert in operations?

That’s great!  You may than be interested in our follow-up online professional education courses starting in January 2018.

The second course (starting around April 2018) will be fully dedicated to the topic of Operations, including more on freight, but at a greater depth, with a strong focus on the professional working environment. During this course we will go much more into detail on the differences and interaction between freight and passenger transport, the challenges of robust timetabling, the maximising of railway track capacity and the stake-holders involved.

Are you interested in finding more information about our online Professional Education Rail courses or are you looking for ways to gain new knowledge and expertise for your daily work? Then, we invite you to join us in the advanced series! Follow this link.

From this point onwards, we will again focus on passenger transport operations, looking at both time-tabling and real time traffic management.