Why do we make a timetable?

There are four main reasons why we make timetables:

Obtaining a workable timetable design isn’t as simple as inputing everything into a single software package; it takes several steps and pieces of software. In general, the design process can be divided into 4 main steps, illustrated in the figure below.

The supply design defines how the trains will run throughout the network. Specifically, it outlines:

It is not yet a timetable. That is the next step.

Below, you can see an example of a supply design. 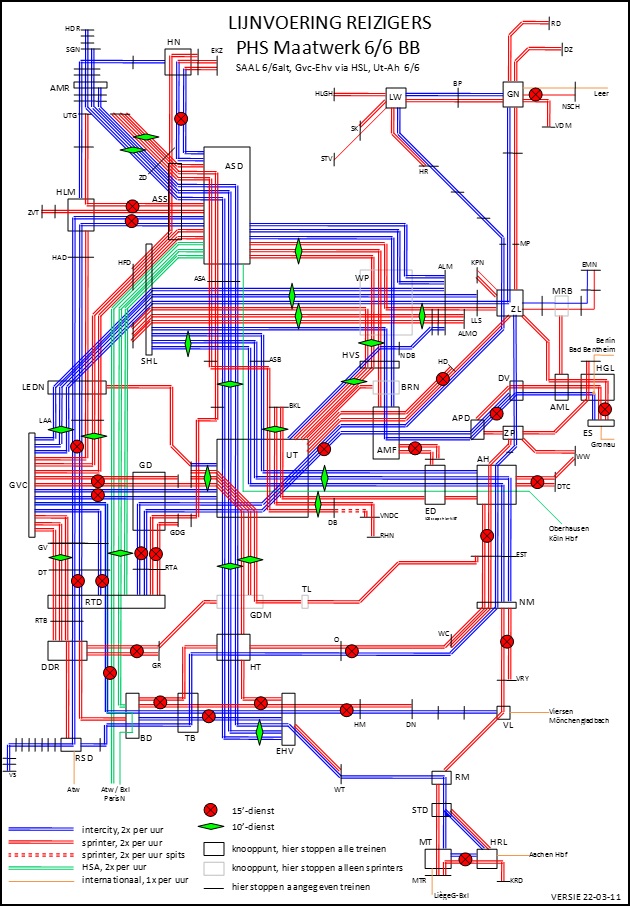 This is based on the  Programme Train Transport with High Frequencies in the Netherlands, which will be discussed in more detail later this week. This is just to give you an idea of the complexity of a dense network.

For passenger transport, making a supply design is a process of many choices because there are many criteria to take into account.

Sometimes, these criteria conflict, and sometimes criteria are not fully rational, such as political wishes. Therefore, most supply designs are hand-crafted, and supported by many tools for evaluation. There are some developments, using Artificial Intelligence, but they have not yet been particularly successful.

In the next units, we will discuss several design dilemmas related to timetabling.

The first dilemma is the number of stops. This is a dilemma between speed and accessibility of the train system. When you add stops, more people have a train stop near their house or destination. The consequence is that the average speed of the train decreases.

Travelers prefer high accessibility. But, for the train operating companies, new stations are often not profitable. The cost of longer driving times are higher than the revenue from the new passengers. At present, in the Netherlands, there are approximately 100 requests for new stations (mostly political wishes).

Another factor to consider is the optimal stop-distance depending on the travel distance. Five levels of scale can be defined as given in the table below. 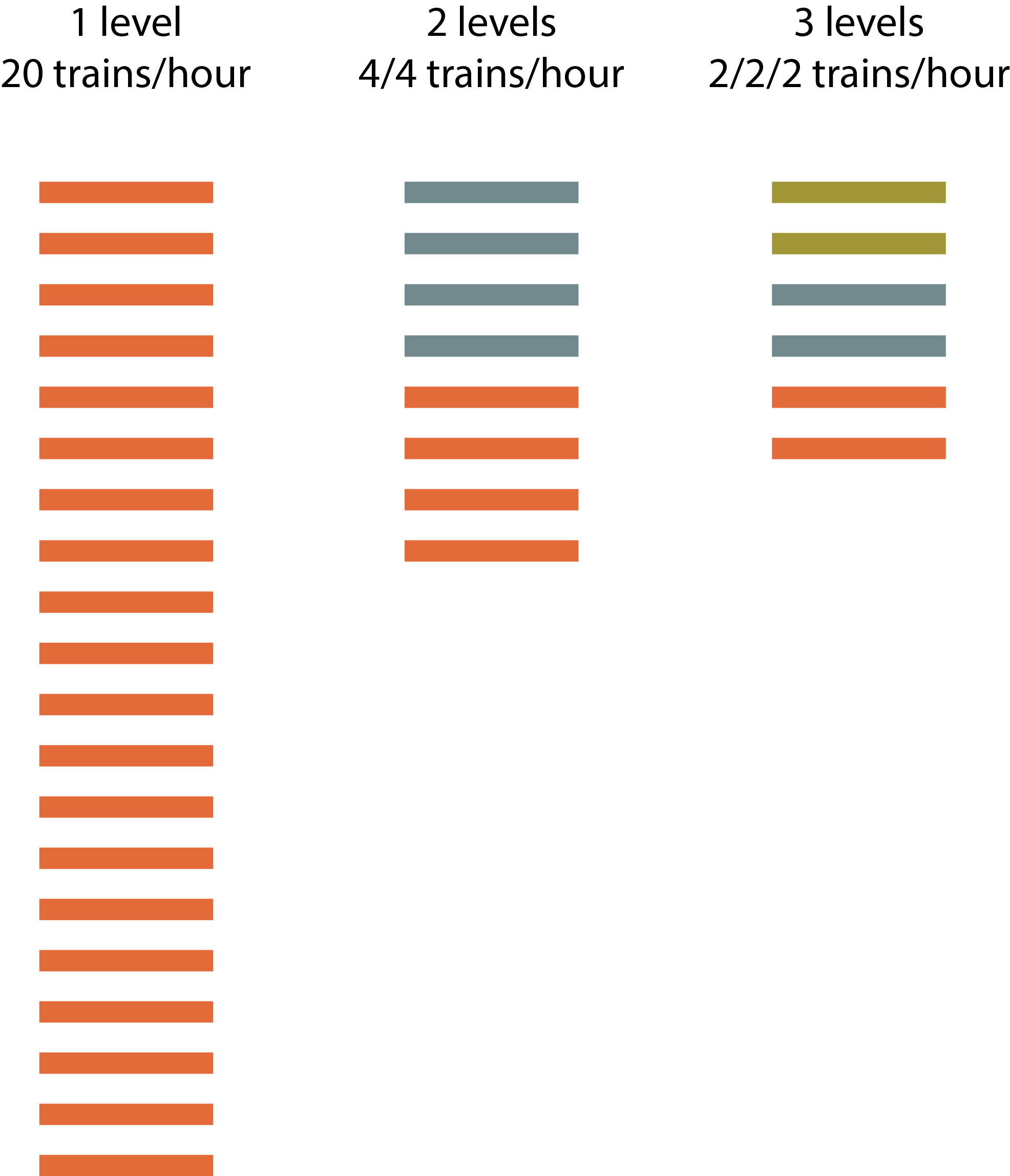 The next dilemma is: how many levels of scale should you offer on one line?

Speed differentiation is very important for the capacity of a rail track (you will learn more about that later). The rule of thumb for the number of levels of scale and the capacity of a single track are given in the figure below. As you can see, the more different levels exist on one track the lower the capacity.

A well-known system with one level of scale is the metro system. All trains have the same speed, size and number of stops. This results in a high capacity and a very robust system. The downside is: relatively longer travel times between main stations. For a national train system, this is unsuitable, as it would displease the traveler (especially commuters). Therefore, a second or even third level of scale is introduced on the same tracks. These trains stop at fewer stations, reducing the travel time between main stations, which better suits traveler-demand. But, the consequence is that the total capacity goes down.

A next dilemma is the coupling of lines through a main station. There are three ways of coupling lines or not:

Coupling of lines are often preferable because of the positive effect on track and station capacity. Less turning trains means the track capacity goes up. Less transferring travelers means fewer transport flows on the stations. This is positive for the station capacity. Furthermore, travelers prefer fewer transfers. A downside of coupling is that the size of the train is based on the busiest section of track. This means that there will be sections where you will run trains that are bigger than necessary. By turning trains the train occupancy is more balanced. Semi-transversal lines are used when turning on the main station is very difficult, because of track capacity. The main example is Schiphol. There the trains run through to Hoofddorp for turning there.

The last dilemma we discuss is the choice between direct train services (without transfer) or high frequencies. In professional terms: alternating or stretched. The image shows alternating lines on the left and stretched lines on the right.

The red and blue lines in the figures go from one track to two tracks. This means a high frequency is possible for the busiest connections. Travellers going off a main line will have to transfer, but the number of travellers doing so is limited. Therefore, no direct line is necessary, which frees up track for the main lines.

A very large determining factor in making supply designs and timetables is the governance: the juridical and financial relations in the rail system. Those relations differ per train type. The four main distinguishable train services are international, national, regional, and freight trains.

Different train services are run by different train operating companies. These train operating companies make their own supply designs. Some companies have to make concessions. Their supply design has to meet certain requirements. There are also differences in finances. Some companies get subsidies, while others have to pay concession fees. The table below gives a quick overview of these aspects for the four main train services.

Notice the differences in concessions:

And notice the differences in finance:

When we look at the previous table we see that there is a large difference between national and regional trains. This is because of the distinction in the Head Rail Network and regional networks. 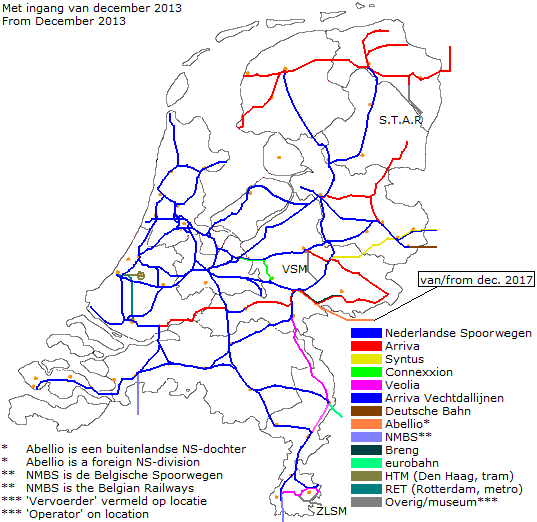 Head Rail Network is run by companies that create supply designs according to the travel market. Most trains travel where most travelers are. This creates the most profitable operation. The government gets concession fees and dividend from the train operating companies but is not in the position to give strict requirements for the supply design.

The regional networks are often not run by the same companies as the Head Rail Network. These companies want to have a profitable operation and that is rarely possible in regional areas due to the small amount of travelers. The companies are more likely to lose money in these areas. So regional networks are only profitable when subsidised. The government pays the train operating companies to make sure trains travel through these more remote areas with a regular frequency in order to accommodate the travelers. Since the government invests in these companies they also give detailed requirements for the supply design.

This division between the two networks is a logical construction and occurs in most countries. This becomes clear when considering what happens when the complete network is managed by one system.

If the regional networks are also run by the same companies that take care of the Head Rail Network, then the supply design in these areas would be created according to the travel market. This means that trains will travel with much lower frequencies or not at all. There will also be less stations. This is the only way that the operation remains profitable. The government does not have to subsidise anymore but the network will become very inconvenient for travellers living outside of the main urban areas.