In the next few pages, we will outline a few: preventive maintenance, creating a robust timetable, automation and dealing with people.

Many different parties and departments are responsible for preventive (predictive) maintenance for all the components within a railway system. The collective cooperation of all the involved parties and well-timed maintenance is necessary to truly prevent unexpected technical failures. Additionally, while planned maintenance can cause planned disturbances, such as blocked lines, these can be communicated to passengers well in advance.

Finally, well-timed planned maintenance does not guarantee that unexpected technical failures will not occur. Low quality maintenance can give false expectations of the operational state of specific components, which can cause unexpected failures.

4.5.2 Robustness of the Railway System 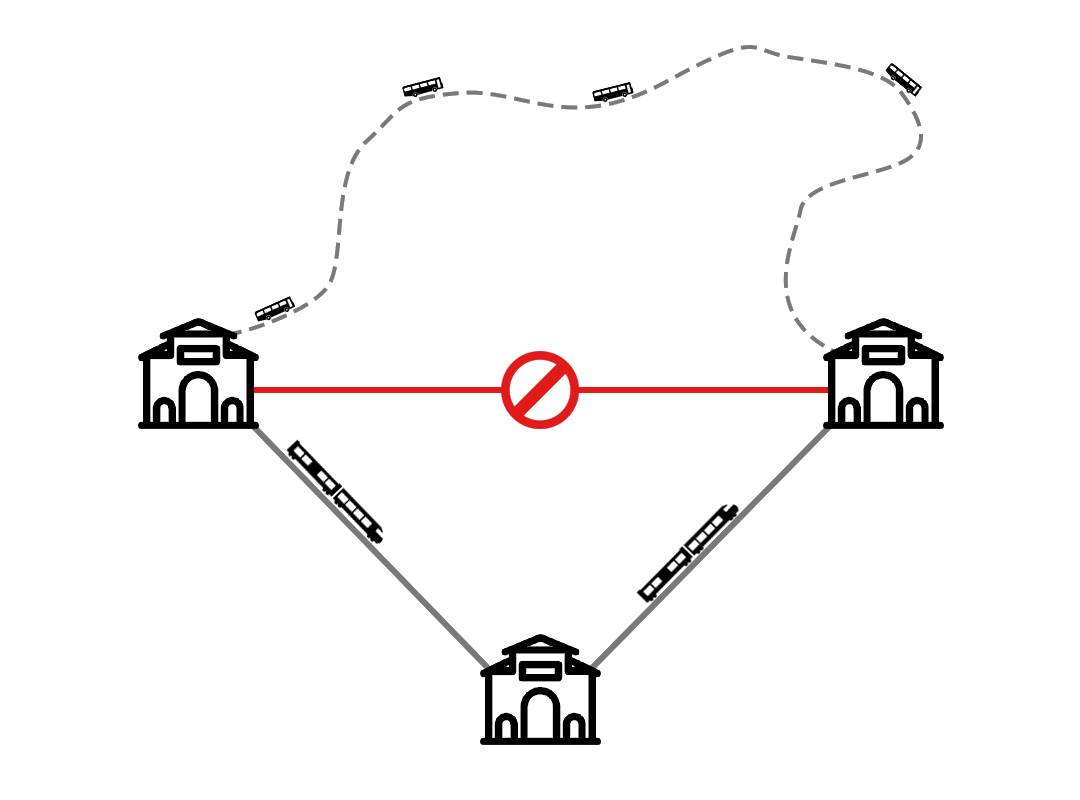 The robustness of the railway system refers to how many lines are available to go from a point of origin to destination without requiring to leave the system. This can be an important factor to limit the extent of propagation of disturbances. For example, more robust systems should be able to give new routes between two different stations when one track has been blocked. Thus, reducing the amount of accumulated passengers and limiting the reduction of customer satisfaction.

The image below depicts an example of robustness. The connection between two stations is lost, but passengers can travel via a different trainroute, or take a bus to reach their destination.

4.5.3 Automation of Time Scheduling and other Sub-Systems

In current systems, the routing isn’t the only aspect has been automated. The full railway system has monitoring and communication, which makes it possible to have the ticket vending, and visualization and communication system also automated. All these automated systems greatly reduce the disturbances that could be caused by human errors.

Whether it is on purpose or by accident, human beings on the train tracks must be taken seriously and thus causes delays. Which is why, if people are seen on or around railway infrastructure, incoming trains are alerted and are thus forced to drive very slowly in anticipation.

In many countries, railways are direct lines from one city to another and when roads are limited or badly accessible by foot, people make use of railway tracks by walking over or close to the track. This can create dangerous situations.

In addition to walkers, human interference could also relate to vandalism, train spotters or suicide attempts. This last topic is extremely complex and has a great impact on many different levels, which makes it rather difficult to deal with.

Whereas only a small portion of incidents are caused by suicide attempts, even one is too many. Prevention is difficult, since each case is individual and often not even close friends and relatives see it coming.

In the case of any human interaction on the railway (including violence, copper theft, railway crossings, and suicide attempts), the best way to reach them is by clear communication on television, social media and news publications.

The video below tells the story of a complex struggle people can have with themselves. It calls out to individuals that might be thinking of suicide, as well as others that might get close to people that consider this. The film has won a Golden Dolphin during the Cannes Corporate Awards 2017.

Discussion: What are the pros and cons of a fully-automated railway?

People are a large factor in the complexity of disruptions: in week 3, we already learned that train drivers are barely able to react to anything interfering with the track, because of the long breaking distance of a train. It addition, trains drivers might not able to come to work for number of reasons and might make make a human mistake, like running a red light or missing a stop. An fully-automated system could resolve these issues.

The nature of railway transport makes it an ideal place to facilitate automatic driving. But there are still only a few cases, where trains (mostly light rail) are operating without a train driver.

Why is this? What are the pros and cons of a fully-automated railway?

The discussion below is on the pros and cons of integrating automatic train driving on a large scale. Among others, questions and issues that might be take in consideration could be:

In the full course on edX, you can write your own post regarding this subject, to which the professor will react in the end.