This week will introduce to you the whole system of maintenance and monitoring, and how smart usage can lead to reductions in maintenance costs!

On the next page, we will start by examining the Hatfield disaster, which indicates that for a railway system to operate safely, it is essential to have a proper maintenance plan. But one direct consequence of Hatfield: putting in speed restrictions for many sections of tracks, shows that maintenance can only be done when enough information is known about the quality of the track. So monitoring is essential as well, in order to be able to perform good maintenance. We’ll be covering these this week. 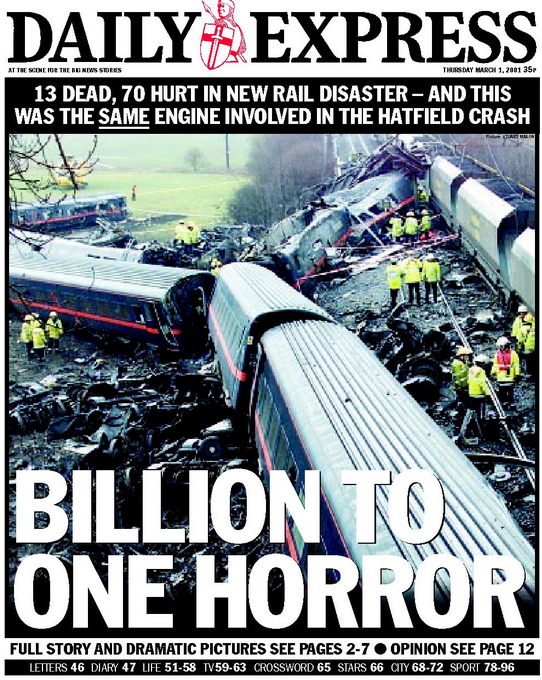 Maintenance is a very important aspect in all systems, even so for rail and train systems. Especially with public transport, where a lot of people use it and rely on the safety of this system.

A good example of why maintenance is so important is the ‘Hatfield Train Crash’. This is a train accident which occurred near London in England. On the 17th of October in 2000 a (GNER) Intercity from London bound for Leeds was travelling at 115 miles/hour (185 Km/h) when it derailed just south of Hatfield train station. The train then travelled for a further 1000 yards (900m) before coming to a complete stop. By then, the train had separated in three sections. The locomotive and first two coaches remained on the rails, but the sections behind it all derailed. The eighth car, which was the restaurant coach, overturned on its side. This coach was then severely damaged when it hit an overhead line gantry. The rest of the coaches derailed, but remained upright.

This all happened in less than 20 seconds. Sadly, 4 lives were lost and another 70 injured of which 3 seriously. The four people who died were all in the restaurant coach which overturned.

The newspaper image used is not from the original Hatfield disaster, but a subsequent one.

The cause of this crash was quickly determined. An investigation found a rail had fragmented and led to breaking of the rail, causing the derailment. The fragmentation was determined to be caused by ‘Rolling Contact Fatigue’. This is a form of metal fatigue, where due to the varying high loads of the wheels on the rail, cracks will form in the rail. When these cracks are left untreated they will grow larger and larger until the rail finally breaks.

Later investigators found out that the problem was already known within the infrastructure company. A letter from December 1999 warned that the existing Railtrack Line Specification was insufficient to guard fatigue failures like these. There were replacement rails available, but never delivered at the right location for installation.

Due to privatisation of the infrastructure market in England a lot of knowledge was divided into multiple contractors. Investigation showed that the experience and knowledge of the working staff became so low that after the crash Railtrack Company did not know if and where more cases of fatigue could cause derailments, and as an emergency imposed over 1800 speed restrictions. It also started a costly program to find and replace rails which had fatigue cracks.

After the crash the speed restrictions and repairs caused significant disruptions on the tracks for over a year, and it is estimated that 400 trains per week were cancelled, resulting in high losses for the train companies. The crash ultimately resulted in the end of Railtrack and some other companies going back together in the Network Rail company.

All of this wouldn’t have had to happen if the maintenance of the track was done sufficiently and by the rules. Neglecting the rules ultimately resulted in much more problems and higher costs.

As you review the next few sections, keep the Hatfield disaster in mind, since we will be coming back to it later.

Even under the most ideal circumstances, no building, structure or anything else human-made will last forever without human interference. Due to wear, but also natural processes, the quality will degrade over time. Maintenance is used to either repair or replace the degraded parts of the structure, in order to bring the quality back up to desired level. In some cases, maintenance might not be possible and a complete replacement of the whole structure is necessary. We can see maintenance in many aspects of our lives, for example, bringing your car to the garage or repainting your house.

Reactive maintenance is a common form of maintenance seen in many different fields. In reactive maintenance, one simply waits for a part to break before repairing it. This is often the ideal solution for small parts, which do not form an integrated part of a high-demand structure. This is, for example, how most people use their electronics: once it breaks, they either repair it or buy a new one.

In some cases, this strategy is also used on railways. In railways, the advantage of this system is the relatively low frequency of maintenance. You only send a team in when it is really necessary. However, once a part breaks, depending on the intensity of traffic on the track, the secondary costs can be very high. If a part of track is unavailable for a long period of time, there are severe economic costs related to this unavailability. Using reactive maintenance also brings certain risks with it. Some failures can lead to derailments of trains, resulting in severe damage or even fatalities. This makes reactive maintenance only suitable for parts of the tracks in which a single failure has no direct safety consequences or is automatically detected, resulting in an immediate stop of traffic.

In preventive maintenance, contrary to what is done in reactive maintenance, the goal is to prevent a structure or object from breaking by maintaining it in time. This is especially important if there are high costs concerned with the failure of the structure, or there is a risk of loss of life. Preventive maintenance is really common in, for example, the airline industry, but can also be seen in many other fields. Consider the maintenance of your car, which is often advised to be done after a certain distance has been driven.

In railways, preventive maintenance can have big advantages over reactive maintenance, mainly in financial aspects. Often maintaining a structure before it is broken is much cheaper than repairing it once it breaks, due to the difference in the techniques that can be used. Aside from that, in many countries the unavailability of railway tracks can have severe economic costs, which can be averted by using preventive maintenance.

With fixed interval maintenance, the maintenance frequency is decided based on either a fixed time or a certain usage. For trains, this usage is usually defined as a certain number of kilometers driven. For railway tracks, maintenance can be done, for example, based on a number of axle passages or a certain summed total axle load. Determining which variable to use and setting the value for the interval can be a real challenge. In principle, the more frequent preventive maintenance is done, the less sudden failures will occur. However, high frequency maintenance will also mean higher costs. In order to be able to determine the optimal frequency for the maintenance, one would need to know the statistics of failure of all important components of a system. Often different components can have very different life-spans, thus making the optimum maintenance interval even harder to find.