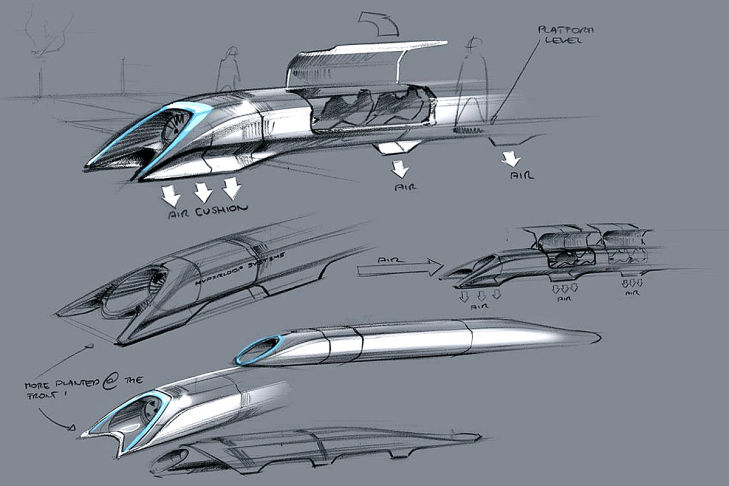 Based on pneumatic-tubes (used in post offices, hospitals, grocery stores and banks), similar ideas for a low air-pressure transport system have been going around for decades, and many sketches and plans had already been made. But over the past few years, Elon Musk made the concept of these trains (or capsules) in low-pressure tubes a worldwide lively discussion.He first mentioned the Hyperloop during an interview with Pando in 2012. Musk spoke about four modes of transportation that exist nowadays: planes, trains, automobiles and boats, and suggested adding a 5th mode of transportation that would revolutionize transport.

Picture: Sketch of Hyperloop Alpha made by Elon Musk

To get such an innovative transportation system approved and implemented, it should be comparable or better than current systems. Compared to the alternatives it should ideally be at least safer, faster and cost less. Furthermore, it would be beneficial if this system would be immune to weather, sustainable and not disruptive to those living near the Hyperloop.

According to Elon Musk, the Hyperloop is a solution that meets all these criteria. It is safer because, just like monorails, the Hyperloop will have its own enclosed transport system, not interacting with other vehicles and/or people, and only accessible via stations. Furthermore, it should be a fully automated system eliminating human errors that caused 75% of the accidents in Europe between 1990 and 2013. It will be faster, as it should eliminate aerodynamic drag, which is the major factor decreasing a vehicles speed, especially at high speeds. And, it should cost less as construction is easier, and pods should be able to ride on electricity that is produced by solar panels on top of the rail network.

In the next sections, the Hyperloop will be explained in terms of the pod, tube and its propulsion. Furthermore, the advantages of the Hyperloop in comparison with its alternatives will be discussed, as will the reason why the Hyperloop is not yet available.

Hyperloop is a system, where a vehicle travels through a low-pressure tube. This tube compensates for aerodynamic drag, which typically prevents other travel systems from approaching high speeds. Aerodynamic drag increases with the square of speed, so at high speeds, vehicles experience high drag forces. The Hyperloop, however, travels through a partial vacuum eliminating air resistance and is therefore able to travel at an average speed of 960 km/h and a top speed of 1200 km/h (click here to access a km to mile converter). To get an idea of how fast this is, a comparison is made when a person travels from San Francisco to Los Angeles with either the Hyperloop, high speed rail, an airplane or with a car. For this comparison, transfer and waiting times are included. 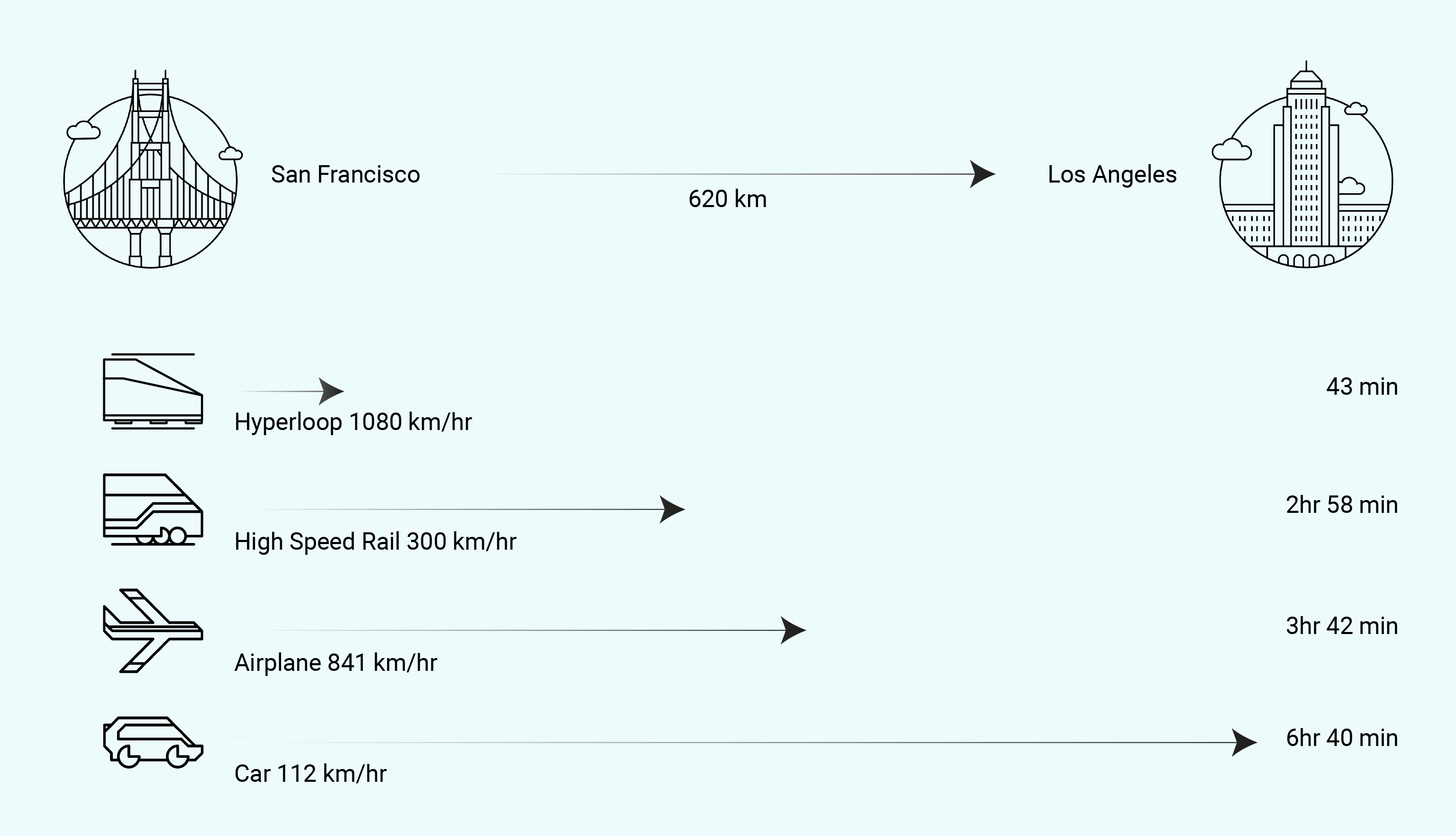 Comparison of different modes of travelling

The pods, also called capsules, are the vehicles carrying passengers from point A to point B. These pods have an aerodynamic shape and will travel through narrow tubes. You might be wondering how that is possible. Normally, whenever a pod is moving at high speed through a tube containing air, there is a minimum tube-to-pod area ratio known as the Kantrowitz limit. This limit makes sure that the walls of the tube and pod are not too close to each other, resulting in the capsule wanting to push the air out of the tunnel. If you imagine the tubes being several hundred kilometers long, this would require immense amounts of energy. Therefore, to make the tubes narrow enough, something is needed. This problem could be solved by either removing the air inside the tube, creating a vacuum or actively transporting the air from the front of the pod towards the back of the pod.

Creating a hard or near-hard vacuum inside a room is already difficult, so trying to create a vacuum inside a 1000 kilometer tube is near impossible. One small leak or crack in a tube, and the whole system would collapse. Therefore, a hyperloop could not be realizable with a hard vacuum. Something that could work, however, is a partial-vacuum system where air is only pumped out of the tube right in front of the pod.

A second solution, as proposed by Elon Musk, is to actively transfer high pressure air from the front to the rear of the pod by using an electric compressor fan in the nose of the pod. This compressor maintains a reduced pressure in the tube, removing the air drag, and uses the oncoming air for levitation and to a lesser extent propulsion. 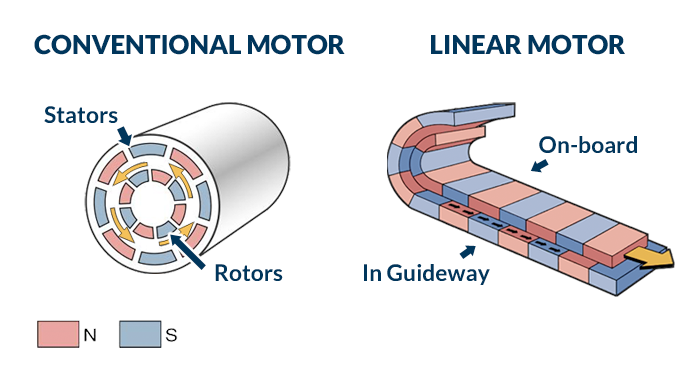 The propulsion of the Hyperloop is very similar to the maglev train. Since a conventional wheel and axle system would become impractical at high speed because of frictional losses and dynamic instability, the magnetic levitation system is preferred. In this design, the force is produced by a linearly-moving magnetic field acting on conductors in the field. Any conductor, be it a loop, a coil, or simply a piece of plate metal, that is placed in this field will have eddy currents induced in it and thereby creating an opposing magnetic field in accordance with Lenz’s law. The two opposing fields will repel each other, creating a motion as the magnetic field sweeps through the metal.

Image from The NorthEast Maglev

As the vast majority of the Hyperloop travel distance is spent coasting, the capsule does not require continuous power to travel. Therefore, this linear induction motor will be used to accelerate and decelerate the pods at the beginning and end of the tubes. In between the remaining couple hundred kilometers, the guideway (stator), which will be placed in sections as a continuous stator, would be very expensive. These sections will help to keep the pods at the same speed. 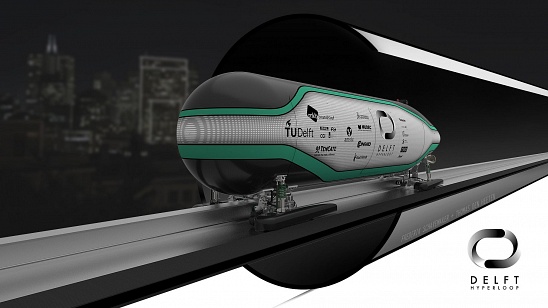 To get the Hyperloop up and running in a short term future, Elon Musk as founder of SpaceX organized a Hyperloop competition, where teams of innovators and students would create their own pod, that would run in a scaled test track at the headquarters of SpaceX in Hawthorne, California. Each pod would be judged upon performance in flight and operations, safety and reliability, and design and construction. The fastest pod award went to the students of the WARR Hyperloop of the Technical University of Munich, but the best overall score went to the Delft Hyperloop of the Technical University of Delft. As the first competition was such a success, a second one was organized to focus on a single criterium: speed. 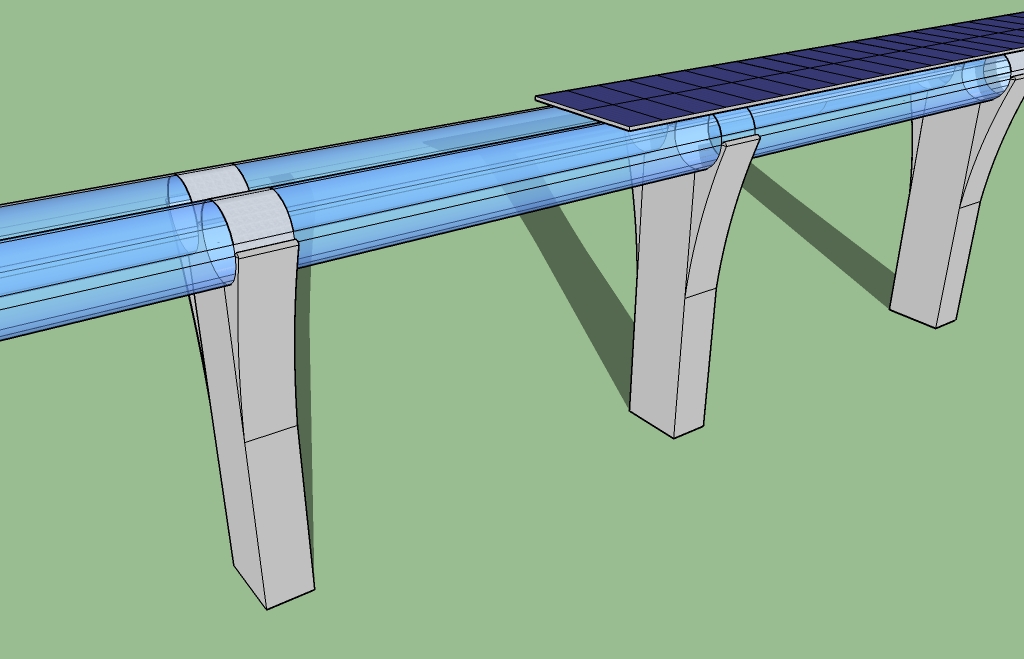 The Hyperloop pods will travel through tubes from one city to another. Two tubes (parallel to each other) transport pods in both directions. To minimize costs, to make constructions easier and faster, and to minimize visual impact for local residents, therefore the tubes should be elevated on pillars. This greatly reduces the footprint required on the ground and the size of the construction area. Furthermore, pillars and parts of the tube (approximately 30 meters) could be prefabricated and only installed on site. Solar panels on top of the tube should be able to create enough energy to power the system and create a sustainable network.

The tube is specifically sized for optimal air flow around the capsule, improving performance and energy consumption at the expected travel speed. The expected pressure according to Musk is about one-sixth of the pressure on Mars, which is equivalent to one-thousandth of the pressure on Earth. This will ensure that the aerodynamic drag is so low that it will not influence the speed of the Hyperloop.

Now the big question is, where is this Hyperloop going to be built? While many people proposed possible routes all over the world, it is still uncertain where it is actually going to be built. Hyperloop One, a company trying to make the Hyperloop a reality, has built a test track in Apex, Nevada called the Development Loop (DevLoop). This DevLoop is already being used to test the principles of the Hyperloop. The same company has also set up a competition to find the best route possible, and these routes had some remarkable similarities: 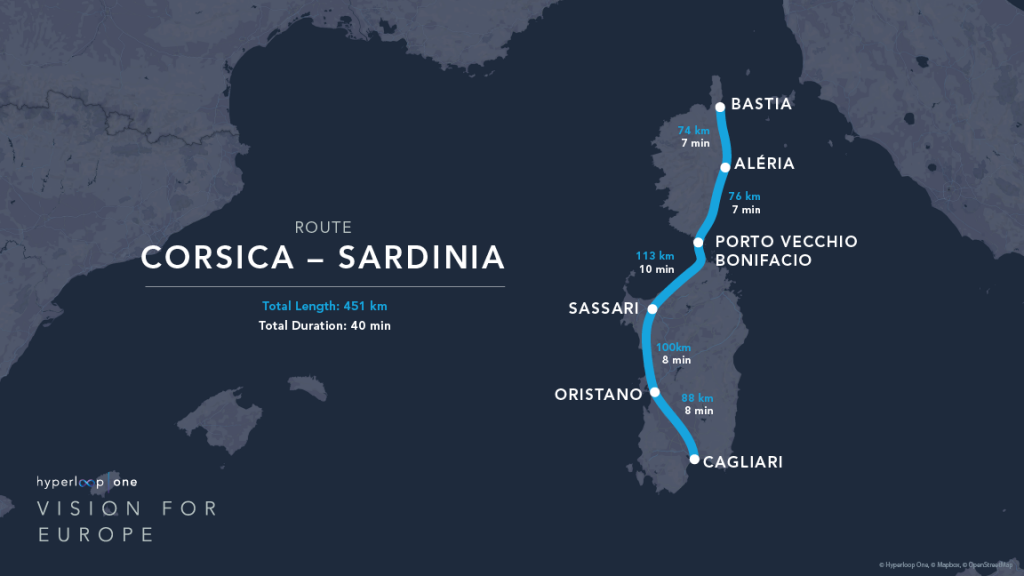 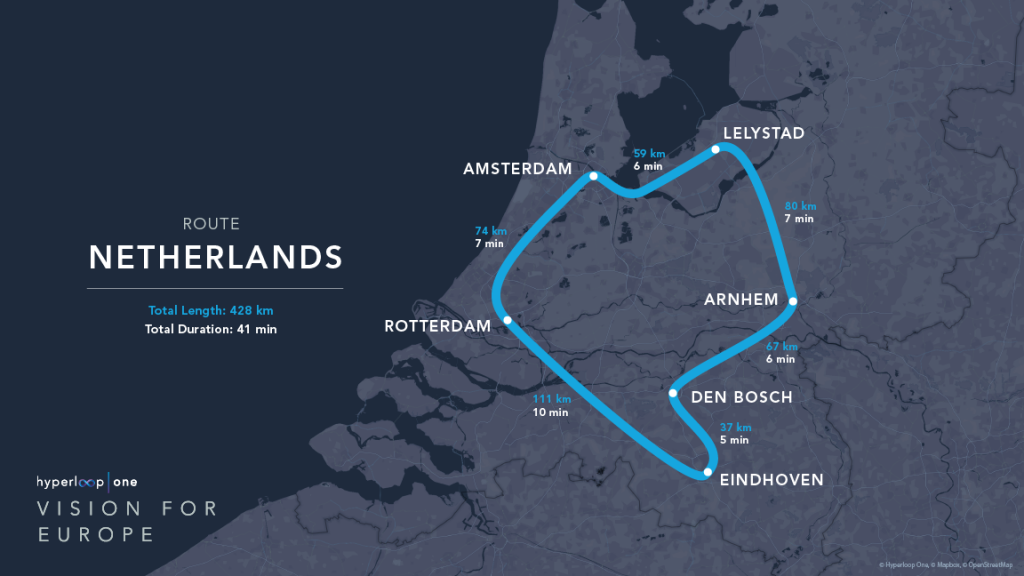 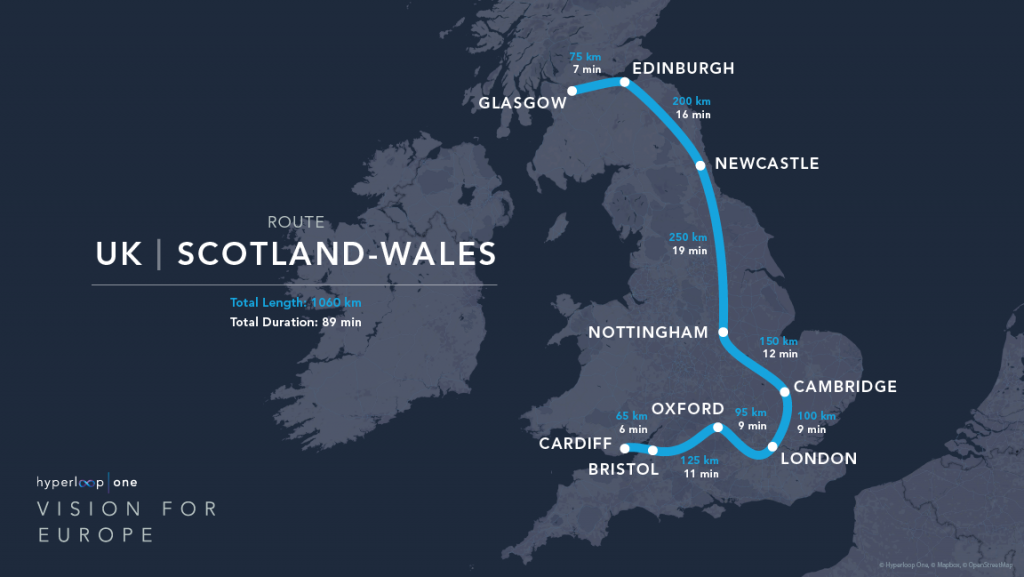 Connecting from Ocean to Ocean 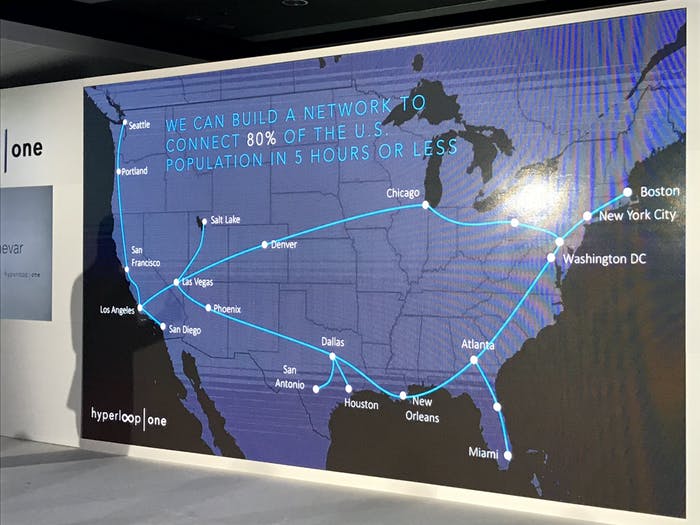 In April 2017 Hyperloop One proposed the first 11 routes in the United States. These routes wil connect some main cities in a network that after adding more lines will stretch from Boston to San Diego and from Miami to Seattle. Instead of hours most travel times would be within minutes, and travelling from coast to coast should take no more than 5 hours in total. 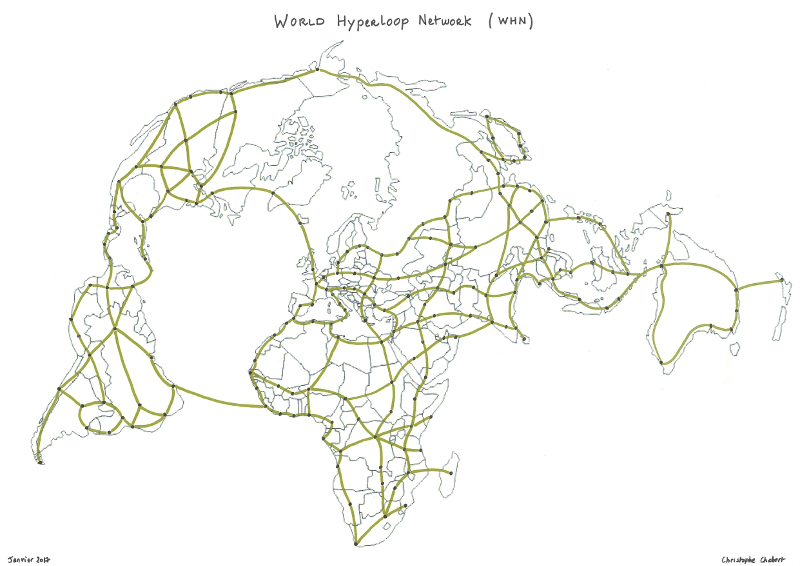 Although having really fast travel within countries is an excellent thing to have, the true advantage of the Hyperloop would be connecting cities across countries. Simply said, Hyperloop could connect the whole world together. The routes could cross borders and oceans, resulting in directer and faster travel.

There are some difficulties still to overcome to realise this though. The length of the routes for instance. The longest tunnels we have nowadays are about 100km long, so passing a whole ocean will be a challenge.

Below, we have added some news articles and imagery on the possibilities of test rigs and proposed routes and implementations for the Hyperloop. If you have any related articles, please feel free to scroll down and share them with other learners around the world. Thank you! 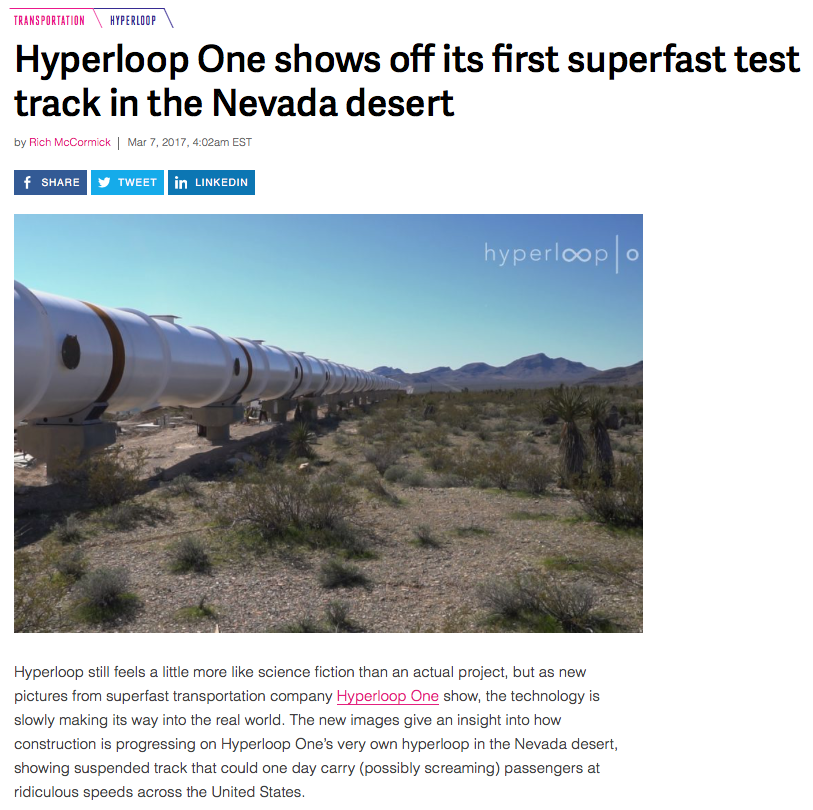 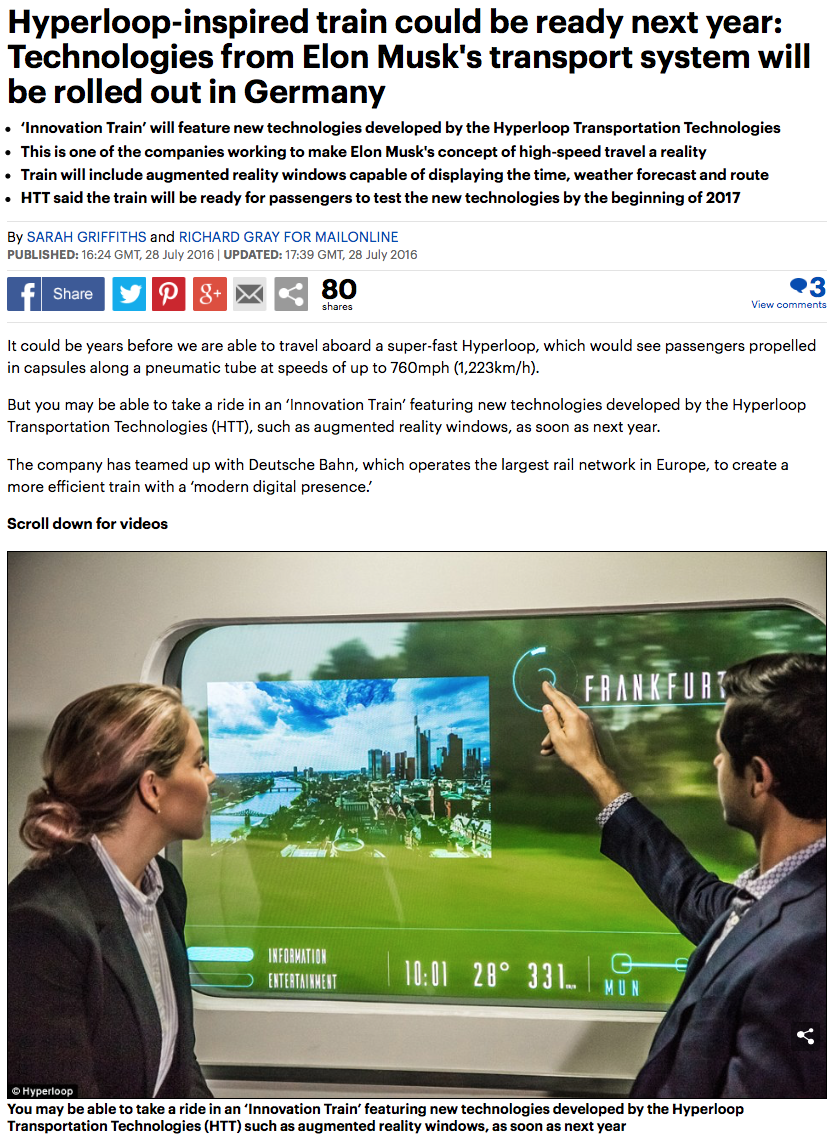 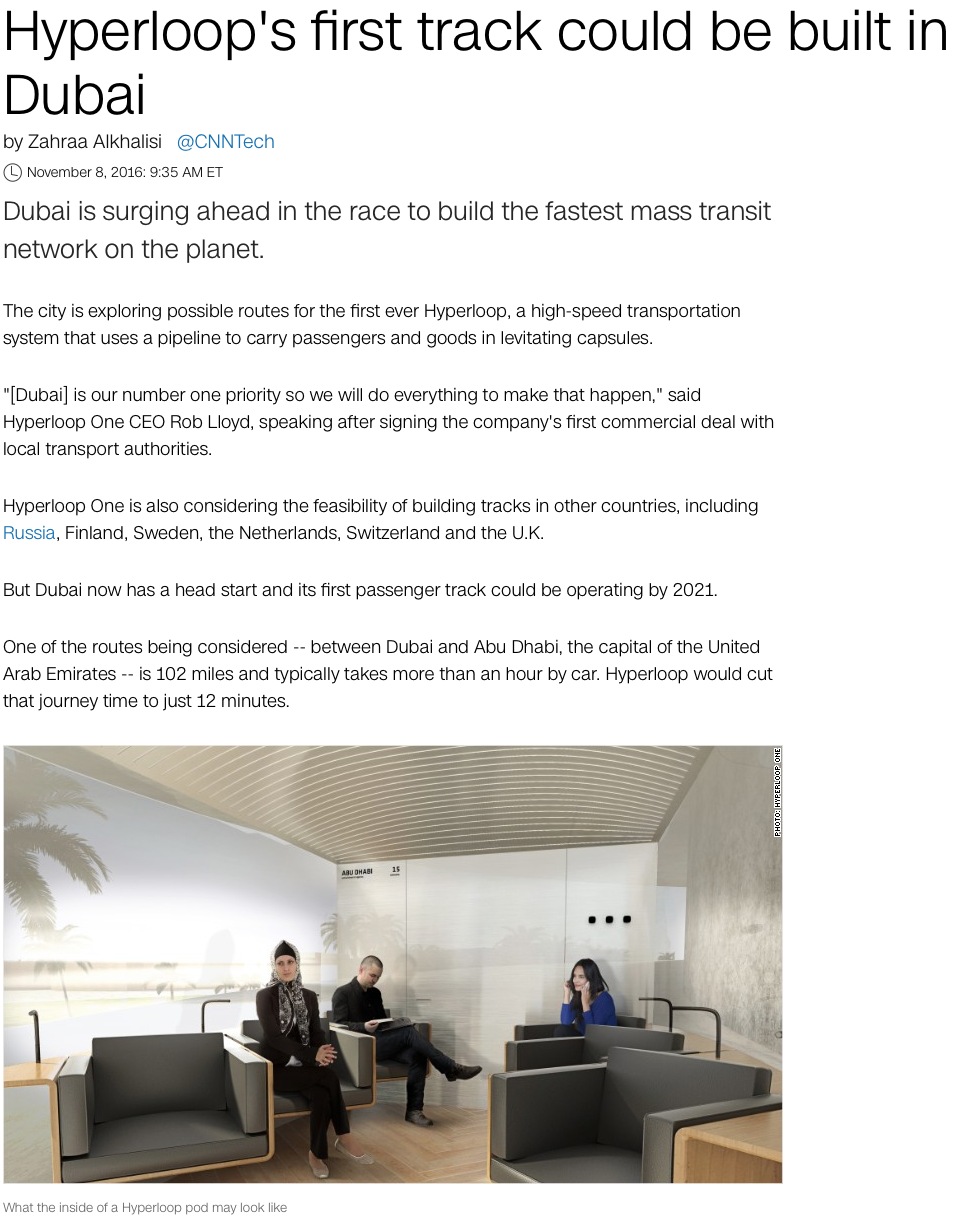 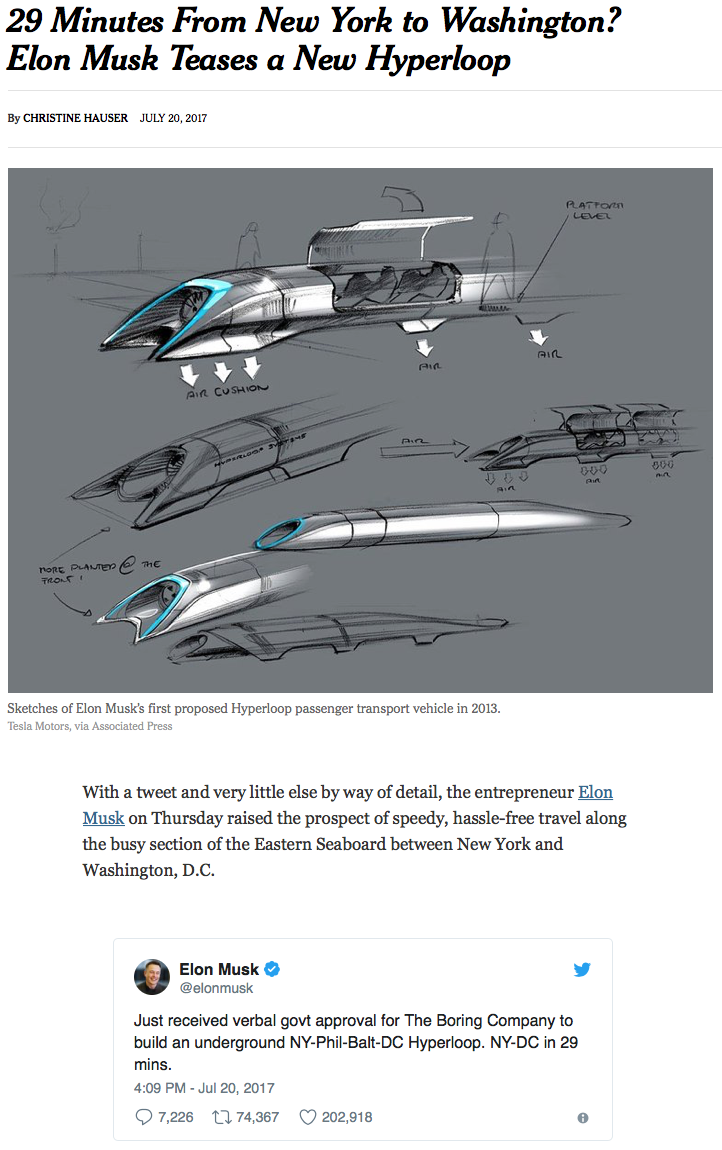 The following discussion is an interactive part of the course on edX.

Over the past years, the Hyperloop has been a discussion topic in many countries at universities, companies and governance. Some see it as a revolution and others don’t see it go anywhere just calling it a ‘hype’. Pros and cons are listed by everyone, but we are very interested in what you think of this development.

Please post your thoughts in the graded discussion forum below. We present a compact SWAT-analysis (below) to get you started. But, apart from this, we would like to address the following questions in your post: