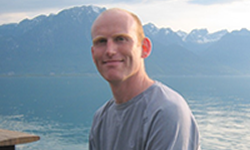 Andy Hooper – considered to be the worlds top expert on Iceland volcano’s – was in Iceland during it’s grea
t eruption in 2010, at ‘his’ volcano Ejyafjallajökull. With satellites and gps he investigates the (sub)surface around Icelands volcano’s, in order to to get more insight into eruptions and how to predict them in the future. He believes Ejyafjallajökull will keep us busy for some time to come, and also that other Icelandic volcano’s might become active as well.