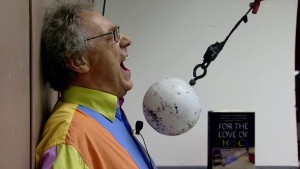 Many of the Walter Lewin Lectures on Physics at MIT have been shown for over six years on UWTV in Seattle, reaching an audience of about four million people. Lewin personally responded to hundreds of e-mail requests that he received per year from UWTV viewers. For fifteen years he was on MIT Cable TV, with programs aired 24 hours per day helping freshmen with their weekly homework assignments. Videos of Lewin’s lectures on Newtonian Mechanics, Electricity and Magnetism, and Vibrations and Waves, among others, can be viewed from the MIT OpenCourseWare web site, and easily viewed as video podcasts on The Internet Archive.

Watch the lecture in Dutch

On November 26th Walter Lewin offered the same lecture in Dutch for a thousend High School students. This guest lecture was organised by the study association VVTP. You can now watch the Dutch Lecture as well.