Ir. Dr. C.J.M. (Chris) Verhoeven was born in the Hague, the Netherlands, in 1959. He received an MSc. degree in electrical engineering from the Delft University of Technology in 1985 and completed his Ph.D. on the topic of “First-Order Oscillators” in 1990.

He has been an associate professor in the Department of Microelectronics at the Delft University of Technology since 1999. His research interests include systematic analog design, RF circuits, adaptive radio systems, drone sensor electronics and avionics, sounding rockets, nano-satellites, and planetary rovers. From 2007-2018 he was part-time working at the Faculty of Aerospace Engineering at the Space Systems Engineering lab. He was responsible for designing and implementing electronics for the Delfi-C3 nano-satellite, which was launched in 2008 and is still operational. He is still involved in developing future nano-satellite missions of the TU Delft. He is one of the initiators of the national project OLFAR (Orbiting Low-Frequency Array), a radio telescope based on a swarm of nano-satellites in moon orbit.

Since 2013 Chris Verhoeven, together with Guido de Croon, has led the Swarm theme of the TU Delft Robotics Institute, which conducts research in the field of swarms of robots, autonomous drones, and rovers. Along with Hans Goosen, he leads the Space Robotics Theme of the TU Delft Space Institute, focusing on developing swarm robots for planetary exploration. The current focus is on the Lunar Zebro, one of the smallest and lightest moon rovers under construction. He is also part of the management team of the TU-Delft Ground Station. 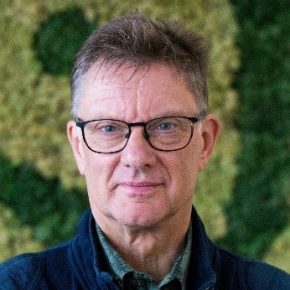