Let’s take a moment to reflect on module 1, 2  and 3 . We discussed complexity and showed how infra-systems can be classified as complex systems. This has important implications. After all, the fact that infra-systems are complex systems also tells us that it is very difficult and sometimes even impossible to predict their future systems states and behaviours. Indeed, they appear to develop in ways that are unexpected and surprising.

In the video in section 1.3  these characteristics of socio-technically complex systems were illustrated by looking at the energy transition in Germany. We showed that the energy system in Germany is facing a number of major problems which are caused by a variety of factors that, at first glance, are seemingly unconnected. First of all, the 2011 tsunami that struck Japan and caused the Fukushima Daichii nuclear power plant to meltdown has caused rising concerns about the safety of nuclera power plants and resulted in the decision to close down the nuclear power plants in Germany. As a result of that in time there will be a need for new electricity generation capacity to replace the nuclear power plants. The power plants that are necessary, are power plants that are capable of providing flexible power generation capacity to cope with the growing dependency of Germany on intermittent energy sources: Wind energy and solar energy. The problem however is that basically only gas powered power plants are capable of providing this flexible power supply, but due to developments in the USA the business case of gas powered power plants have severely decreased in comparison with coal fired power plants. Due to the shale gas revolution, gas prices in the USA have plummeted causing the USA to switch from strongly relying on coal for their power supply to more gas powered electricity generation. The result is that the USA is now flooding the european markets with their excess coal causing coal prices to drop in Europe. And there you have it: Through a chain of causal effects of two unrelated and seemingly unconnected events the electricity sector in Germany now might have serious availability problems. That’s a surprising result!  We compared it to the proverbial butterfly in China which, through random, unpredictable causal relationships, causes a hurricane somewhere far away in the USA.

We  can imagine that we may have left you in a state of  confusion. Major problems are bad enough, but if we then say that we cannot predict these things because it is all so very complex, well, that is taking things even further.  But there is thus no straightforward way of directing or managing these complex infra systems and that their governance is no easy matter.

So the main question is for this week: What  are ways to manage  infra-systems at different levels?  In this section we will focus on the  governance level, the operational level (regulation) and the steps in between. 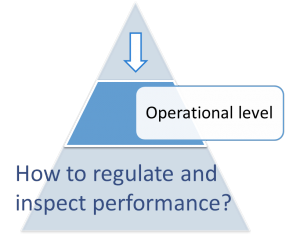 Quite a bit of work do, so let’s get started!